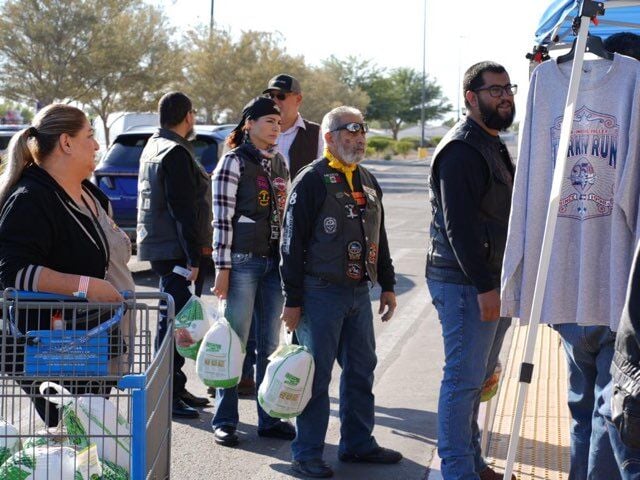 Individual donors and motorcycle enthusiasts line up at the registration booth and event starting point with turkeys to donate for the 25th annual ABATE Local 38 Turkey Run, Saturday, November 19, in El Centro. 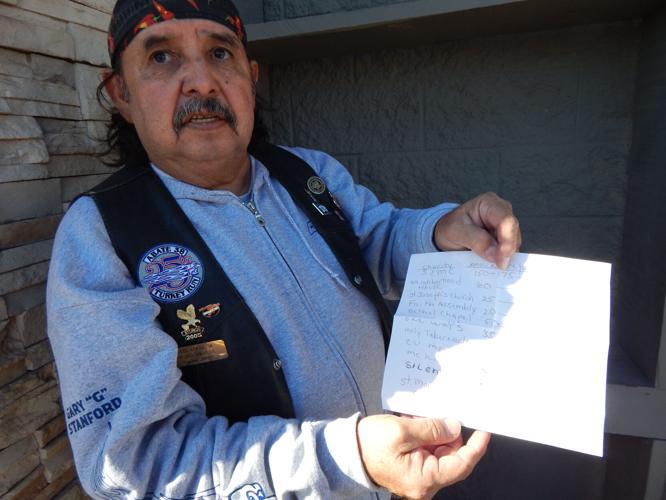 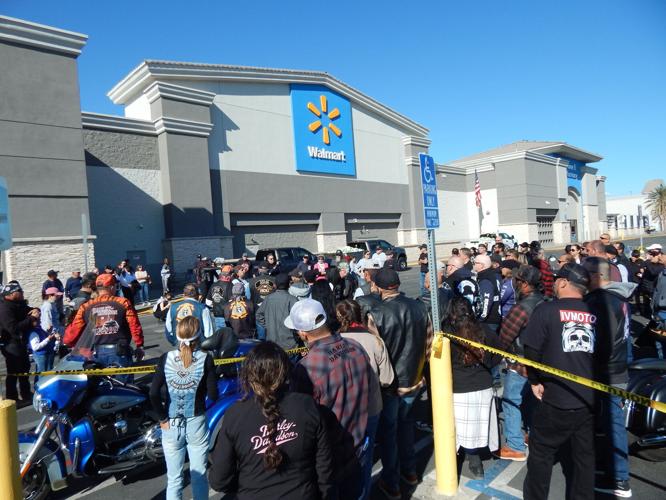 Bikers gather before riding off to deliver donated turkeys throughout the Imperial Valley at the start of the 25th annual ABATE Local 38 Turkey Run, Saturday, November 19, in El Centro. 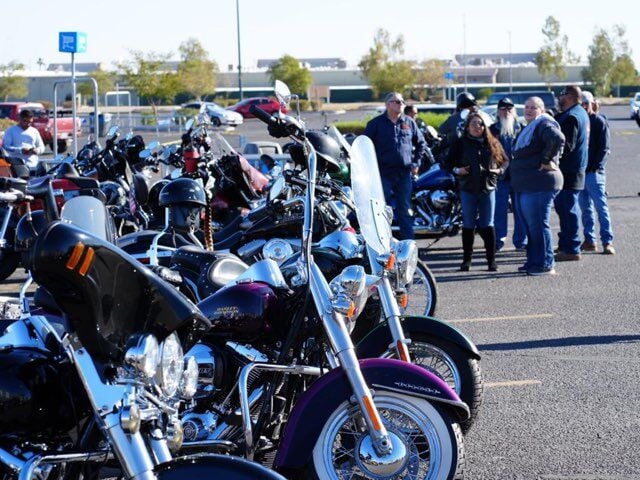 Lines of motorcycles are parked in the Walmart parking lot for the start of the 25th annual ABATE Local 38 Turkey Run, Saturday, November 19, in El Centro. 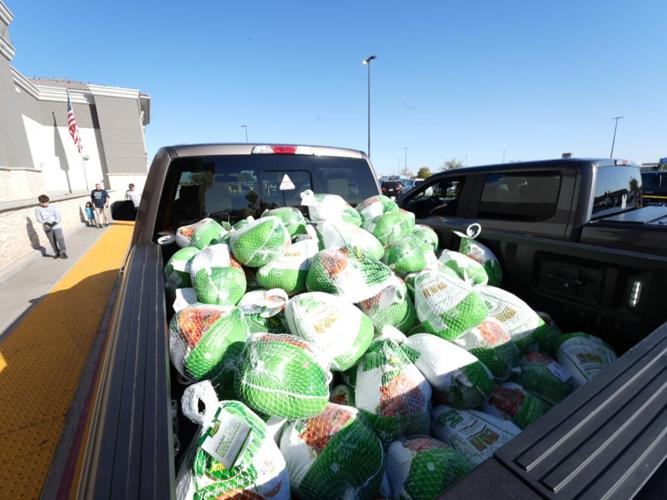 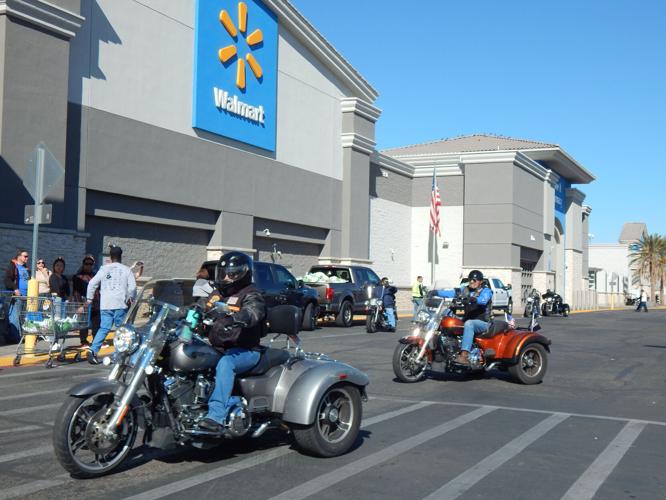 Bikers begin to ride off to deliver donated turkeys throughout the Imperial Valley at the start of the 25th annual ABATE Local 38 Turkey Run, Saturday, November 19, in El Centro. 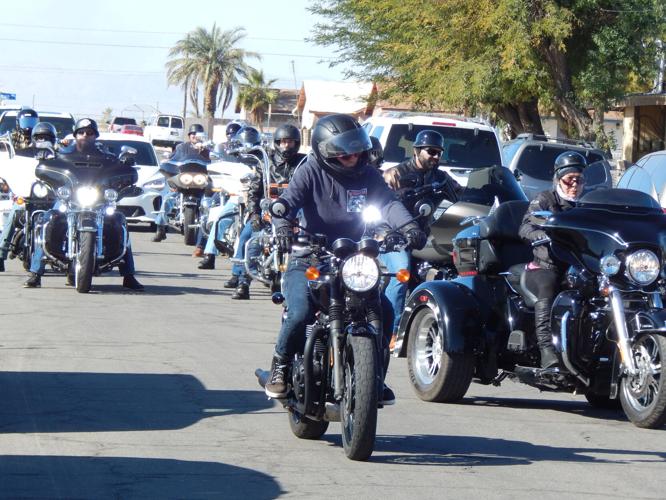 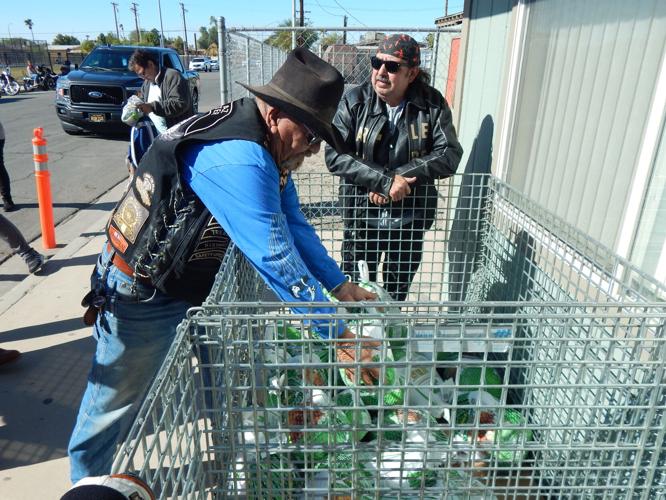 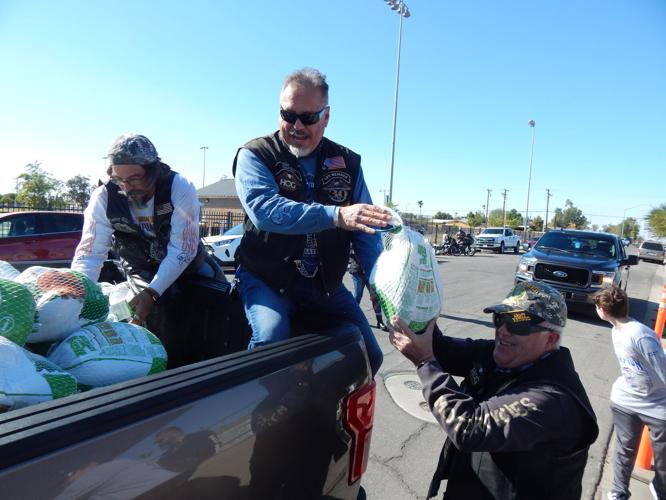 Individual donors and motorcycle enthusiasts line up at the registration booth and event starting point with turkeys to donate for the 25th annual ABATE Local 38 Turkey Run, Saturday, November 19, in El Centro.

Bikers gather before riding off to deliver donated turkeys throughout the Imperial Valley at the start of the 25th annual ABATE Local 38 Turkey Run, Saturday, November 19, in El Centro.

Lines of motorcycles are parked in the Walmart parking lot for the start of the 25th annual ABATE Local 38 Turkey Run, Saturday, November 19, in El Centro.

Bikers begin to ride off to deliver donated turkeys throughout the Imperial Valley at the start of the 25th annual ABATE Local 38 Turkey Run, Saturday, November 19, in El Centro.

The annual Turkey Run brings together do-gooding motorcycle enthusiasts from the Imperial Valley and surrounding areas of Yuma, San Diego, Los Angeles, Long Beach, Yucaipa, even as far as Canada to the Imperial Valley to bring donated frozen birds to needy families for the recipients to enjoy Thanksgiving dinners throughout the Valley come “Turkey Day.”

More than 100 riders met up in the parking lot of Walmart in El Centro on Saturday, Nov. 19, for the cause trying to supply about 400 hungry families with turkeys donated by 37 sponsors, disseminated through a mix of 12 churches and nonprofit centers who work to feed the needy.

“It's a big milestone for us – I think for any group – to sustain 25 years,” said Edward Aranda, ABATE Local 38 chapter president.

“Back in '98 there was like 40% unemployment and there were a lot of little charities that got little to no funding, so that's what motivated us,” Aranda said of the Turkey Run’s origins. “We saw a need and it's just something that kept getting bigger and bigger each year.”

“Like I say every year, it's been a labor of love, only this year it seems like a lot more work,” Aranda said. “I'm hoping to get some younger members now because a lot of us are getting up there in age and we want this thing to continue.”

Aranda said he begins planning in August for this one-day event in November, usually held near Thanksgiving, to aid families. Aranda said the bikers take turkeys and drop them off in El Centro, Calexico, Holtville, Imperial, and Brawley.

The twelve charities which ABATE 38 is dropping off turkeys for will disseminate the birds further, with its largest recipient, the Sister Evelyn Mourey Center in north El Centro, taking some of the donated foul to families in the Valley’s north end beyond Brawley.

“We've been recipients for 15 to 20 years now,” SEMC Executive Director, Susan Chasang, said at the Turkey Run’s first drop-off point. “The bikers have been amazing, and we never had a skip, event during the pandemic, so they are really committed.”

“It may seem like it's not that impactful, but for the families that are receiving it, it makes them feel like they're not being left out and that they're being thought of because a lot of families are struggling right now,” Chasang, whose nonprofit deal routinely with local needy families, said.

“When they get a turkey that's meat for quite a few days but also it's just the thought: Getting them in that holiday spirit,” she said. “It's about hope; giving them hope to get through this holiday and to get through Christmas. That's the impact really.”

“We do our best provide what we can, the only thing that happens is when we don't meet the request goal we have to cut down the numbers of the high capacity asks,” said ABATE 38 Vice President Frederick Bryant. “We tell them, 'You might not get everything but you're going to get something.’”

“We are to help one another, we are to love one another, and if we don't do this we'll find something else to do,” Bryan said. “We've got to do for those who can't do for themselves.”

Aranda said about 450 turkeys were requested throughout the various charities to help feed their needy families, but about 20 minutes before ride-off time the group was about 150 turkeys short.

“We buy $2,500 worth of turkeys ourselves,” Aranda said. “Right now we have to see what The Man Upstairs is gonna do.”

After a quick word from Aranda and a group prayer – led by Bryant, who is also Chaplain of the Blue Knights California Chapter 10 Motorcycle Club of the Imperial Valley – many bikers could be seen running into Walmart for some last minute turkey-donation buys to fill the remainder of the beds of three pickup trucks worth of the frozen turkeys that were delivered on the run.

After the Sister Evelyn Mourey Center stop in north El Centro, the group rode south to Coyne Power Sports in El Centro before making stops at the Calexico Neighborhood House, St. Joseph Catholic Church in Holtville, Faith Assembly Church in Imperial for a final drop-off for a variety of smaller charities, and a final stop at Gateway Church where the riders themselves were fed after a job well done.

“We love to help people, and we know times are tough right now, so we want to put in whatever we can to help,” said IV Moto co-coordinator Rocio Green.

“We could do so much more when we work together. I love to see all the bikers with their different patches come together for a good cause,” Green said. “The ride is going to be great. It's a beautiful day.”

“It's about getting that holiday spirit up for people,” Chasang said.

The Sister Evelyn Mourey Center office will be open Monday from 10 a.m. to 4 p.m. but staff will be delivering turkeys to the north end community, Chasang  said.

To aide needy families for some who might not have been able to receive a turkey, contact the Sister Evelyn Mourey Center through Susan Chasang at (760) 996-0409 or by email at schasang@moureycenter.org by Monday, Nov. 21.

Ivpressonline Conversations permits occupants to submit criticism questions and demands utilizing the most well-known specialized apparatuses they as of now utilize every day like text email or computerized media details Are there any students who have never considered hiring a credible research paper weblink that composes administration This is exceptionally impossible because learning at some demanding school or serious college is exhausting unpleasant and debilitating.