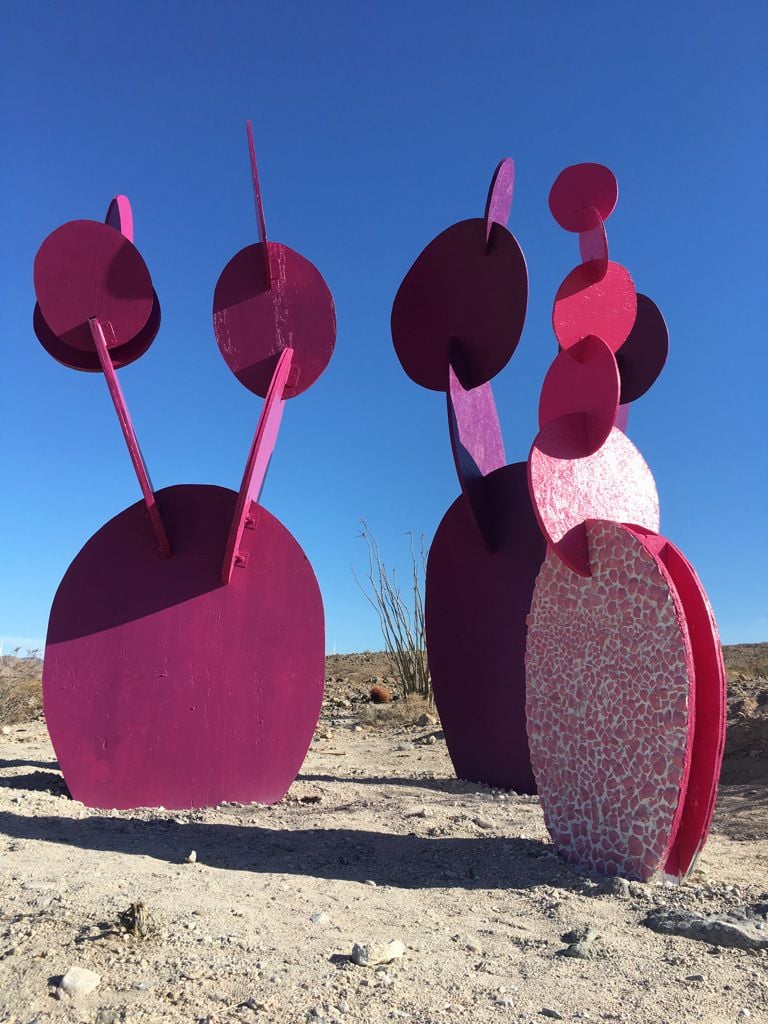 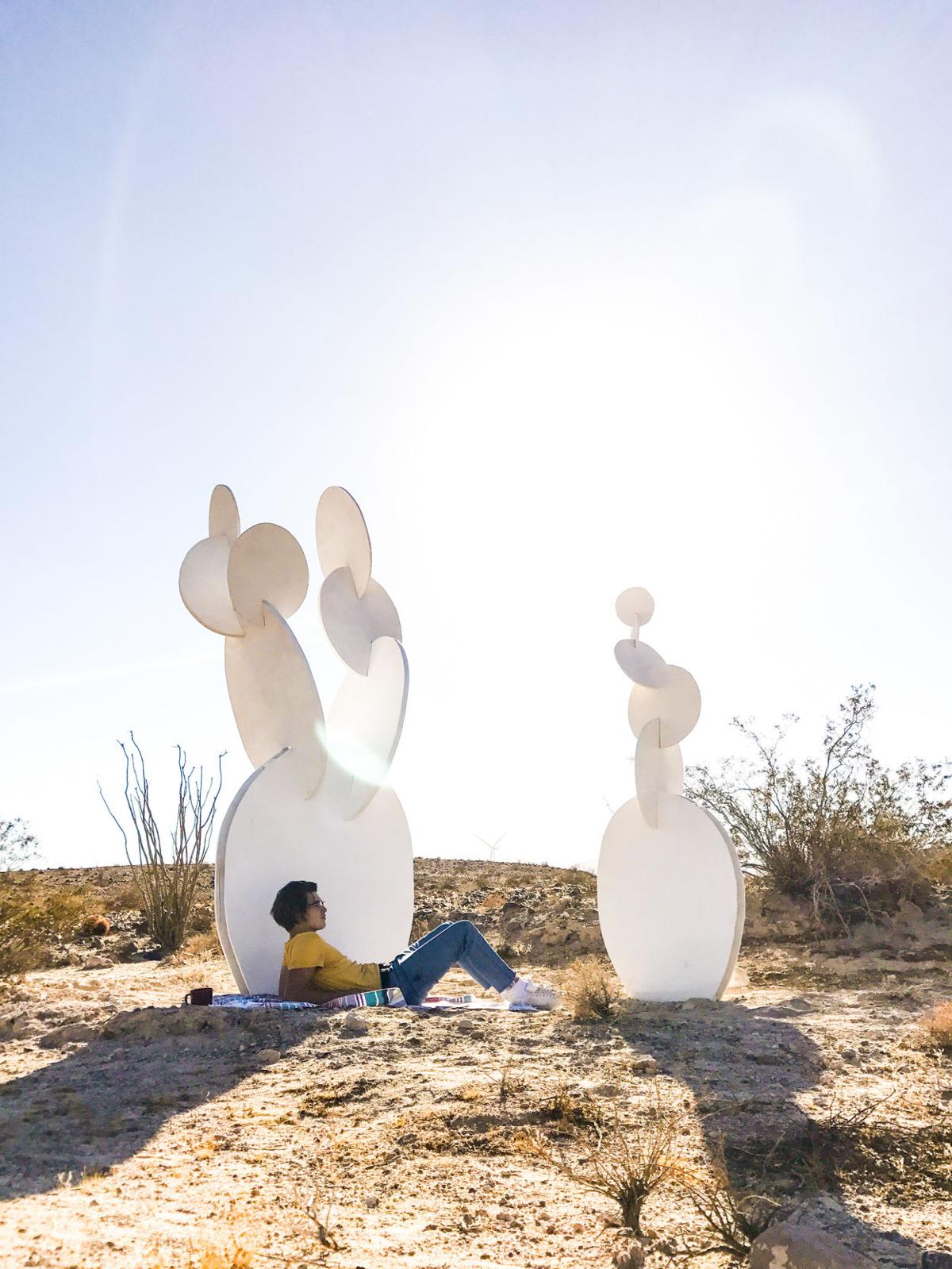 Across the last several months, a new form of art has appeared across the Imperial Valley Desert Museum campus. These large, desert-sized installations seem to grow out of the landscape itself. They accentuate, not distract, from the place they’re meant to celebrate. From new mosaic signs and murals, to an upcoming giant desert tortoise, to a trio of giant purple cacti, IVDM’s Artist-in-Residence has been busy bringing new life and energy to the desert through art.

Over the past year, the IVDM Artist-in-Residence, Neal Lucas Hitch, has been working on developing a series of large-scale installations for the museum that explore the theme of desert-sized-art. The desert is a seemingly infinite expanse of sand, with little vegetation or infrastructure to provide context of size. Here, scale starts to disappear. To build on this kind of radical site requires radical proposals at unusual sizes.

Hitch’s work demonstrates multiple solutions to the same questions: How big does sculpture need to be to compete with the size of the desert? What form does it take? And how do people relate to art relative to our own, human-scaled perspective?

The latest installation of desert-sized art is the interpretive execution of a child’s rendering of a purple prickly pear cactus brought to life. Now a trio of brightly-painted sculptures, these large cacti give new life as defining characteristics on the landscape and greet visitors to our desert.

The cacti are made of rebar-supported plywood. During construction, under the direction of our Artist-in-Residence, museum staff tested multiple ply materials to determine the optimum deformation of the sculpture in the wind. As residents of the area know, Ocotillo is no stranger to high winds. Gusts exceeding 45 miles per hour are common experiences, and are always a consideration in new construction: This land of extremes requires extreme installations. Against this, building three desert-sized art pieces, each essentially acting as its own sail in the wind, was no small task.

The result is a kinetic sculpture that gently sways in the wind like a real cactus. Its upper areas are painted an assortment of bright colors, designed to reflect the life and diversity of the real purple prickly pear cactus, and to be just as eye-catching in its presence. Getting up close to it, visitors will see an even greater detail. The base of the sculpture is covered in a mosaic made from hundreds of pottery shards, collected from failed pit firings of pottery first made by children at the museum. Their inclusion speaks to the nature and success of the desert itself: Everything comes from something, and the desert is a place of infinite resourcefulness and repurpose.

The science of prickly pears

There are more than 15 different species of prickly pear cactus, including beavertail, hedgehog, pancake and purple prickly pear. These hardy cacti are found growing in the washes, rocky hillsides and other sandy or gravelly soils of deserts across North America. Most prickly pear cactus have yellow, red or purple flowers, and colors vary even among the same species.

All have flat, fleshy pads that look like large leaves. These are actually modified branches that serve the cactus for water storage, photosynthesis and flower production. Like most cactus, prickly pears usually have large spines, which are actually modified leaves. These spines provide the plant with a degree of protection from the sun, and give it additional surface area to catch morning dew or rainwater. The prickly pears can also have series of fine barbs called glochids around their spines. These glochids detach easily from the cactus, but not easily once they are lodged in skin! Some species, like the beavertail cactus, may be considered ‘spineless’, but still possess glochids. The spines that offer the plant protection are also used by other desert dwellers: Packrats will often build dens at the base of a prickly pear to protect themselves against predators.

• Cactus is from the Greek word kaktos, which means “prickly plant.”

• Members of the Opuntia genus, prickly pear are closely related to cholla, which have cylindrical, joined stems instead of flat pads.

• Their height varies by species, ranging from less than a foot to seven feet tall.

• The prickly pear became the official state plant of Texas in 1995.

• Prickly pear fruit is sold under the name tuna, while its pads are considered a vegetable called nopalito or nopales.

As with all museum installations, the giant cacti will be added on to over time. Coming soon will be a small kiosk or sign explaining the art, as well as a landscaped trail guiding visitors the short distance from the road over the wash to the sculptures. Small solar lights to spotlight the statues at night have already been added. Museum staff have seen many people stop by to admire the cactus and take pictures of them, and we hope this exciting trend continues! If you snap a picture, consider sharing it on social media and tagging the museum, and let’s get the hashtag #giantpurplecactus trending online!

The Imperial Valley Desert Museum is in Ocotillo. The museum is open Wednesday through Sunday, 10 a.m. to 4 p.m.