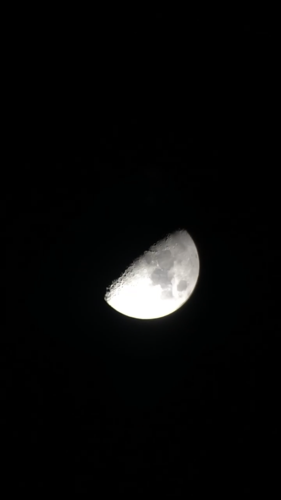 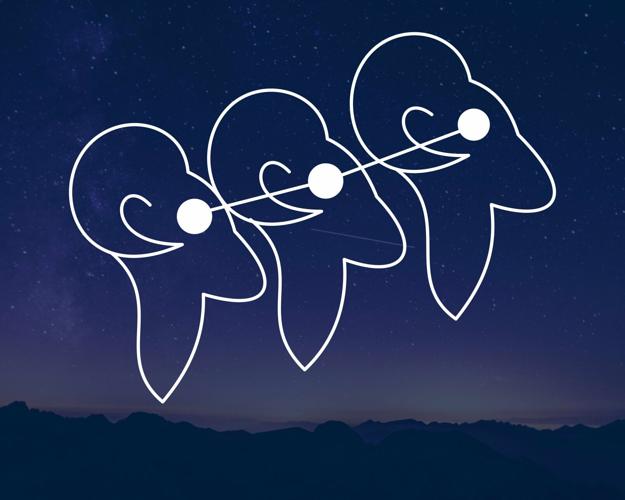 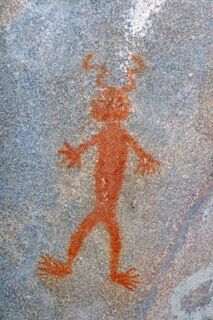 Painted figure from La Rumorosa, Mexico. It is unique to the Kumeyaay and may have represented a Sun Spirit or Sun Watcher. PHOTO COURTESY KEN HEDGES 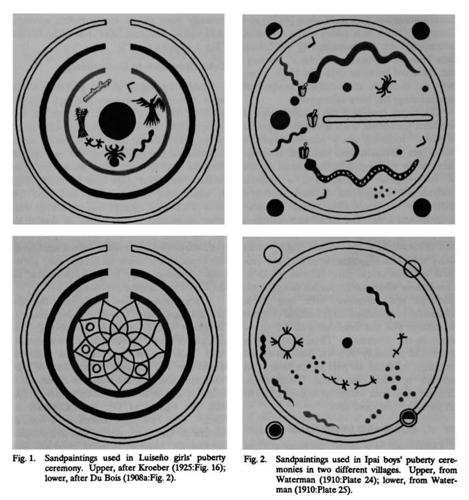 Painted figure from La Rumorosa, Mexico. It is unique to the Kumeyaay and may have represented a Sun Spirit or Sun Watcher. PHOTO COURTESY KEN HEDGES

At IVDM, we’re currently gearing up for our new exhibit on Kumeyaay cosmology, “Maay Uuyow: Sky Knowledge,” opening in January 2023.

The study of Kumeyaay cosmology, called Maay Uuyow (“Sky Knowledge” or “Sky Knowing”), was essential for tracking time, navigating, and planning harvests, among other things. Though Maay Uuyow is no longer absolutely necessary for these things, it continues to serve an important religious and cultural function by keeping Kumeyaay stories, lessons, and traditions alive for generations to come.

Kumeyaay cosmology contains many stories about the origins of the universe, sun and moon, and knowledge itself. After land was created, Yokomat and Tuchaipa, the creator brothers, made light in the form of the sun and the moon. Tuchaipa made the moon out of white clay and Yokomat made the sun out of yellow clay, and they decided that the sun would light up the day and the moon would light up the night. Tales of creation are woven into the stars as well: meteors, for example, are said to be sparks still falling from the burning of the great snake Maayha-owitt (or Maihaowitt), which released knowledge into the world.

The origins of this exhibit lie in the book Maay Uuyow: Kumeyaay Cosmology by Michael Connolly Miskwish (Campo Kumeyaay). Published in 2016 after decades of research, Maay Uuyow: Kumeyaay Cosmology is a perfect overview of Kumeyaay knowledge and traditions that have lasted for thousands of years, and it inspired the idea and topics for the exhibit. We are very grateful to Mr. Connolly Miskwish for his written contributions and consultation during development.

One of the most distinctive and memorable parts of Kumeyaay cosmology is its constellations. The same star groups that many of us know under European names like Orion, the Big Dipper, and Cassiopeia were constellations for the Kumeyaay as well, but with different images, names, and stories. For example, the three stars in Orion’s belt are actually the eyes of the three mountain sheep in the constellation Emuu, and the Big Dipper is envisioned as an outstretched arm (Shallymat) that serves as a natural clock-hand as it rotates in the sky at night. Kumeyaay constellations are much more than pictures; they are reminders of the higher powers that watch humans and of the importance of following the right path in life.

IVDM’s exhibit will showcase the 17 Kumeyaay constellations from Mr. Miskwish’s book, replicating the designs on large-scale, full color prints made in-house by our Education Coordinator Luis Landeros. We’ll be wiring small LEDs behind each print to make the constellation points twinkle and glow, which will look amazing in the dimmed exhibit hall!

The Kumeyaay have created physical manifestations of Maay Uuyow across the desert in the form of rock structures (solstice markers and observatories) and art, such as pictographs, petroglyphs, and sand paintings. For important ceremonies, the Kumeyaay traditionally employed natural materials to create sand paintings that were 3D visual representations of the cosmos. Beans, seeds, or pigment outlined elements that symbolized constellations, celestial bodies, and geographical features like mountains or rivers. Sand paintings are highly sacred and temporary creations by nature, erased after completion of the ceremony.

For observing the skies and celebrating the solstices and equinoxes, the Kumeyaay historically used natural or man-made rock formations as markers or observatories. These structures aligned with the sun’s position at sunrise or sunset on the solstice or equinox. Some sites, such as the famous solstice markers at La Rumorosa, still exist today, while others were destroyed accidentally or intentionally. The exhibit will highlight solstice markers and observatory sites in San Diego County, Imperial County, and Mexico, featuring high quality photos by Ken Hedges. A recreated sketch of a sand painting from 1910, as well as examples of sand painting materials, will also be on display.

“Maay Uuyow: Sky Knowledge” will be on exhibit at IVDM from January to April of 2023. Please join us at the Museum on January 6, 2023 from 6 p.m. to 9 p.m. for the exhibit opening and a stargazing event focused on Kumeyaay cosmology.

The Imperial Valley Desert Museum is located in Ocotillo, California. It is open Wednesdays through Sundays 10 a.m. to 4 p.m.