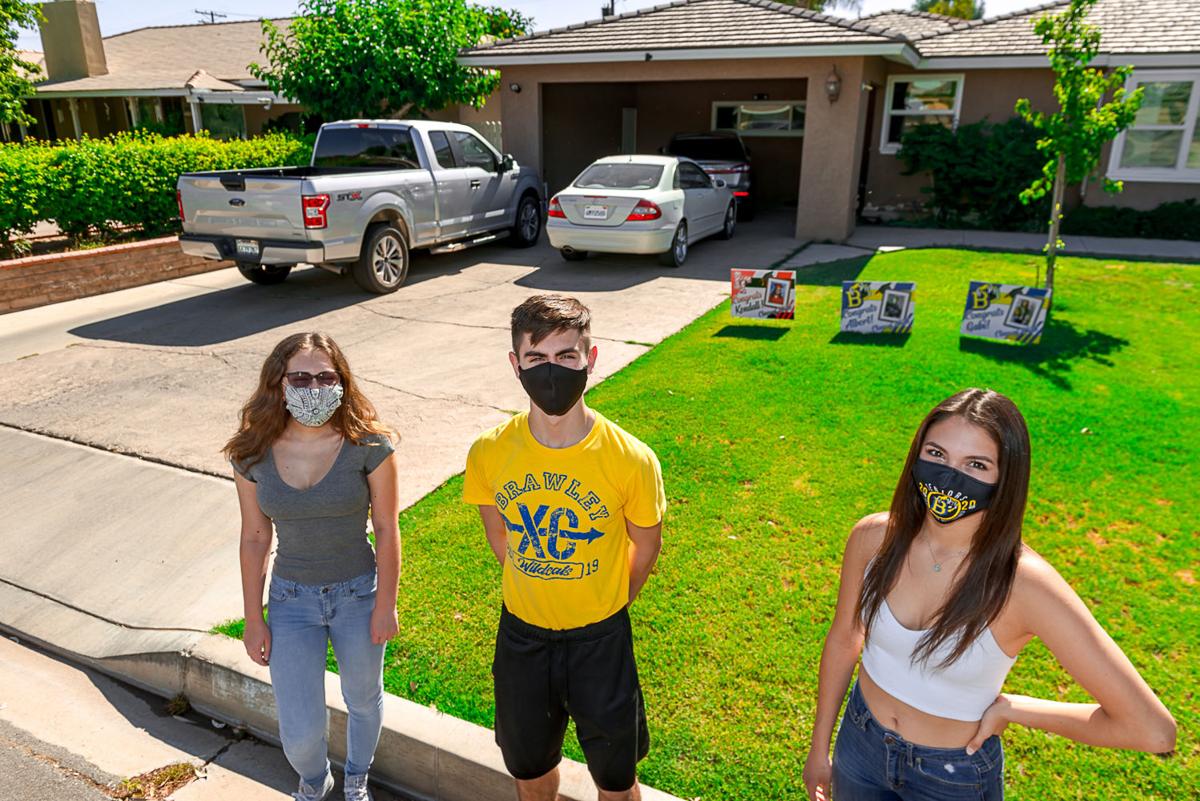 FROM LEFT: Graduating seniors Kendall Shields, of Imperial High School, Albert Rodriguez and Gabi Hernandez, of Brawley Union High School, pose in front of yard signs made for them on Friday in Brawley. PHOTO VINCENT OSUNA 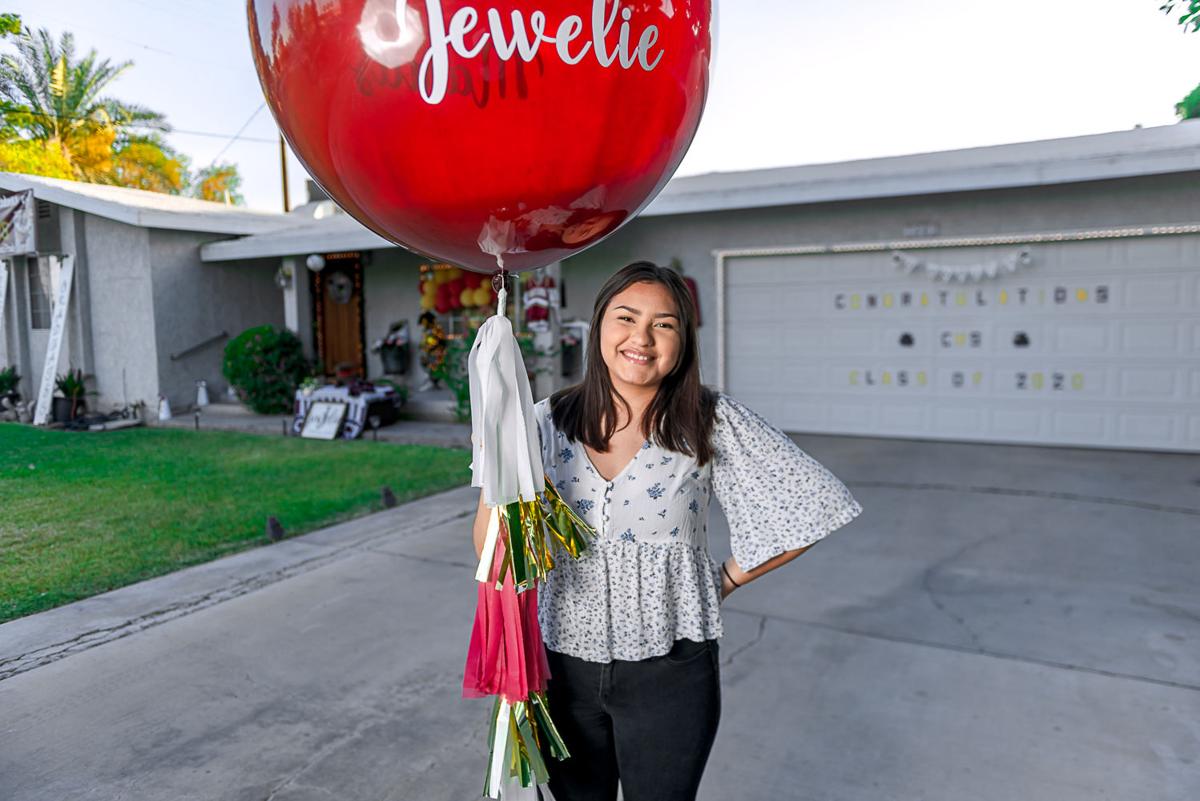 Calexico High School senior Jewelie Prado poses in the front yard of her home, which was decorated by her grandmother in honor of her graduating, on Friday in Calexico. PHOTO VINCENT OSUNA

Editor's note: At no point did the El Centro Police Department need to clear out any students during Central Union High School's “Senior Swag” pick up event on Thursday.

EL CENTRO — While it’s a given that graduation ceremonies will take place virtually this year, local high schools have been working hard to give their class of 2020 the best experience possible.

Discussions have been held throughout the Imperial Valley about ceremonies being held in person once the COVID-19 pandemic is over.

For the time being, the Valley’s graduating high school seniors will have to celebrate with each other from a distance.

A plan that most of the Valley’s eight high schools followed was calling in their student graduation speakers, filming them delivering their speeches, and then playing the video during the virtual ceremonies.

Some schools have also organized their own drive-by parades to celebrate their seniors.

The timeline of the virtual ceremonies generally follow the Valley’s usual high school graduation season, with Vincent Memorial Catholic High School starting off and Calexico High School being the last.

While its ceremony typically takes place at Our Lady of Guadalupe Church in Calexico, this year’s ceremony was condensed to an 18-minute video, which can be viewed on YouTube.

“I know that this graduation of 2020 is like no other, but your youth, your intelligence, and especially your love of what is right and true will carry you and allow you to fulfill your dreams,” Father Ken said during the opening of the video.

The name of each graduating senior was read aloud during the video, and each senior sent in a photo of themselves to be displayed in the video.

Popular Mexican singer Reik also made a shout-out video dedicated towards VMCHS’ class of 2020, which can be viewed on the school’s Instagram account.

Central Union, Southwest High and Desert Oasis high schools will each have their own professionally produced virtual graduations online at 6 p.m. Tuesday.

A link to each ceremony will be provided on Central Union High School District’s Facebook page.

“This is a complete ceremony with speeches, names read, photos, music, videos and the turning of the tassel,” the district stated on its Facebook page.

CUHSD conducted a survey in May. It reached out to its parents and students and inquired about possibly having a graduation ceremony in person.

Per the survey results, 64 percent of students and parents want a live, in-person ceremony in the fall.

The district stated that it will be planning for a tentative date to hold a ceremony for each of its schools in the fall.

In a recent Facebook post, the district addressed the fact that parents have been organizing local events such as parades around town or at the shopping mall.

A parent-planned event is scheduled to take place at 6:30 p.m. Monday for SHS graduates. The event will take place at the Imperial Valley Mall, and feature a drive-by procession.

“The District, nor its schools, are sponsoring or organizing the events,” the district stated. “We encourage all participants to be safe, follow social distancing guidelines and obey all traffic laws. We are excited for our graduates.”

A drive-by event for CUHS graduates did take place at 6 p.m. Thursday at the CUHS parking lot. The “Senior Swag” pick up event was for seniors to pick up some senior gifts and other items.

The names of each senior were read over a public address system, and school staff helped direct each vehicle.

Trouble arose as vehicles began to gather in the Valley Plaza parking lot near the school. Police were prompted to clear the area.

For Brawley Union High School, a drive-by celebration is scheduled to take place at 6 p.m. Wednesday in Brawley.

The school-sponsored event will be live-streamed, and only one vehicle will be allowed per family.

Holtville High School’s drive-by celebration will also be live-streamed. The graduation parade is scheduled to begin at 6 p.m. Thursday.

The top 20 graduating seniors will lead the vehicle line. The parade will run from Melon Avenue and end at the high school.

Only one vehicle per graduating student will be permitted in the parade, and no limousines or RVs will be allowed.

At the end of the parade, each student (one at a time) will exit vehicles to receive his or her diploma. All students will be required to wear a face covering and practice social distancing.

All other occupants must remain in their vehicles. On its Facebook page, HHS said accommodations can be made for graduating seniors who don’t have transportation.

For Calipatria High School, no information about a virtual ceremony had been posted on its official website.

Calexico High School will be hosting a virtual graduation for its 688 graduating seniors at 7 p.m. on June 11. The link will be published on the school’s website and social media on June 10.

Calexico is also having a drive-thru graduation celebration on June 18 and 19 (time to be determined).

Parents and seniors are invited to participate in the parade. Social distancing and masks will be required.

A few clouds from time to time. High 111F. Winds light and variable.

This Week in Pictures: June 26-July 2