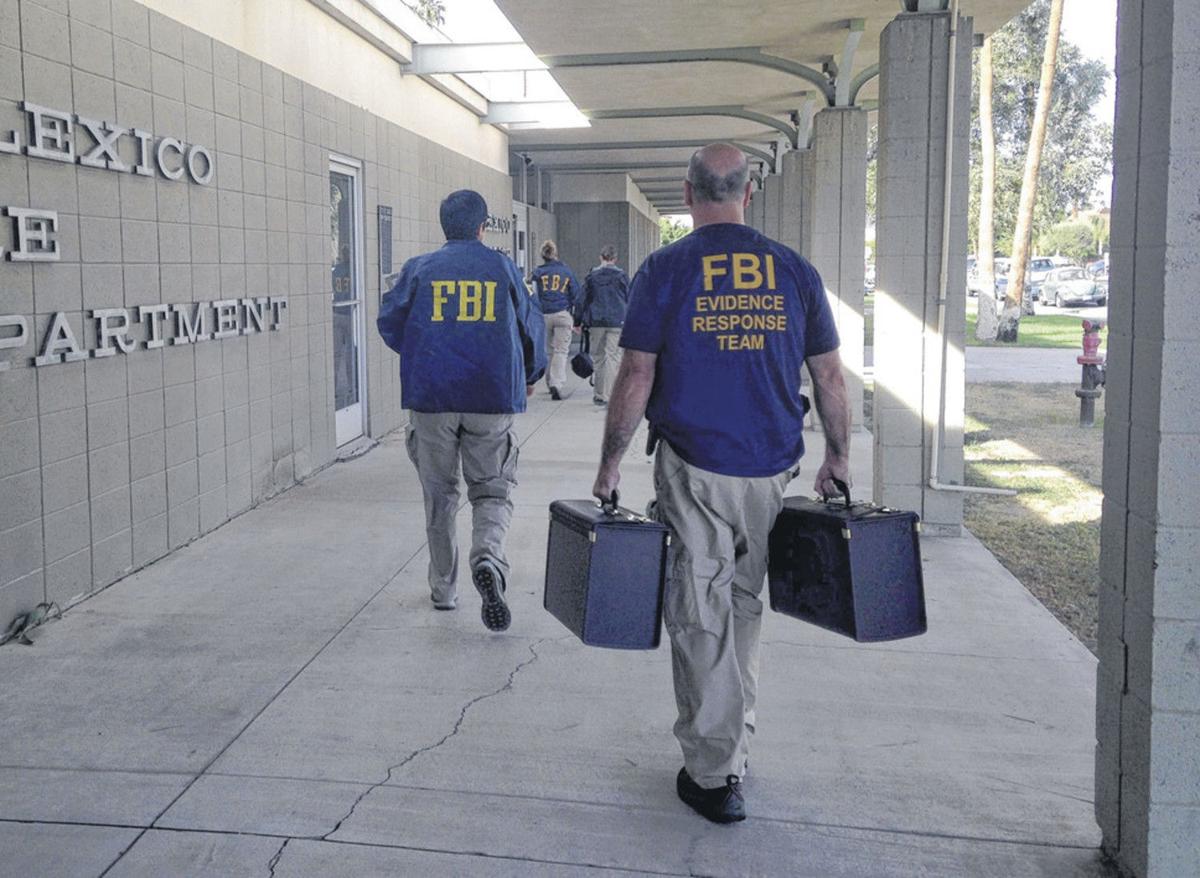 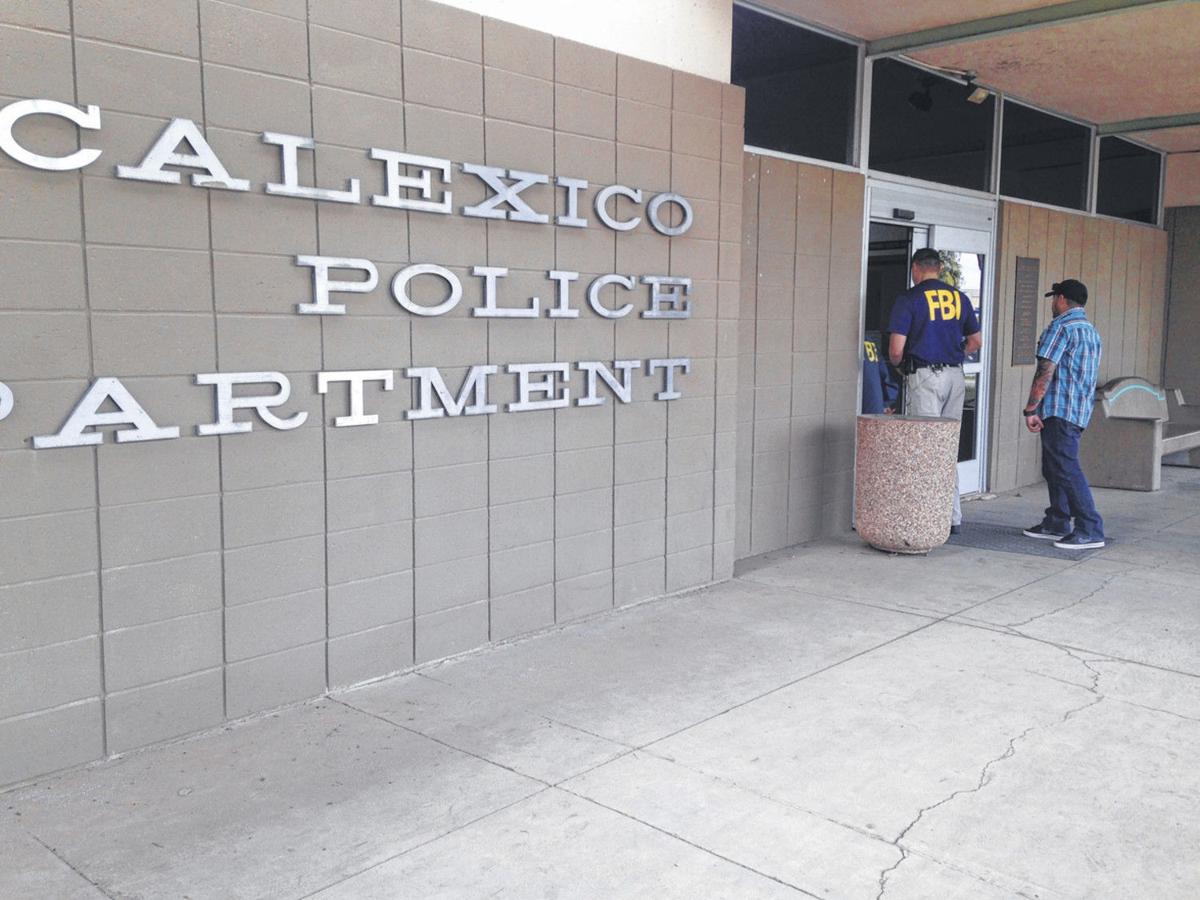 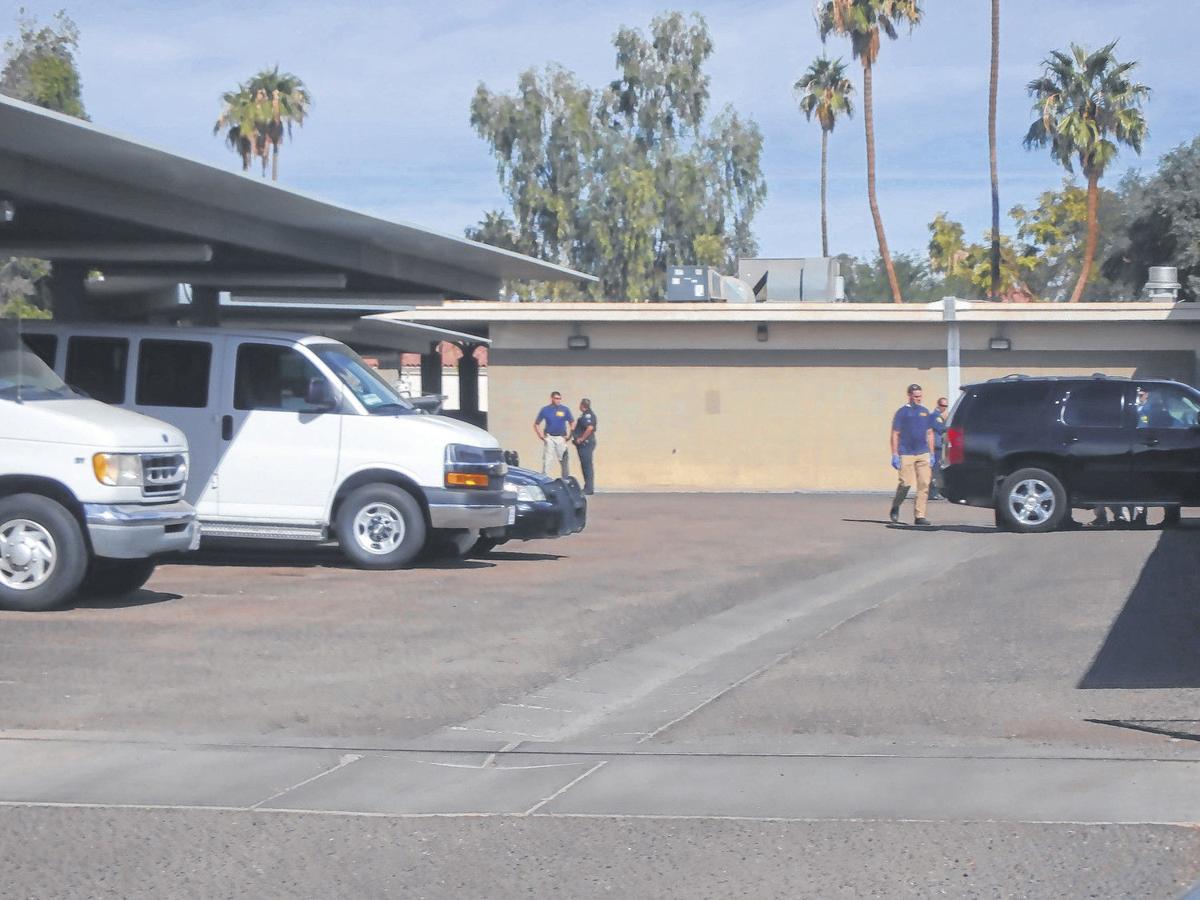 FBI agents search vehicles at the Calexico Police Department as part of an on-going investigation on Thursday.Photo Chelcey Adami

FBI agents search vehicles at the Calexico Police Department as part of an on-going investigation on Thursday.Photo Chelcey Adami

CALEXICO — As nearly 30 FBI agents descended on the Calexico Police Department on Thursday morning to seize computer hard drives, documents and other potential evidence in an ongoing investigation, four police officers were relieved from duty as part of the inquiry into potential criminal activities at the department.

Although no charges have been filed and no arrests were made Thursday, a source within the city said the four officers relieved from duty are Sgt. German Duran, Sgt. Frank Uriarte, Detective Luis Casillas and Detective Gabriel Rodriguez.

City officials would not corroborate the officers’ identities or even discuss how many officers were put on leave.

Casillas addressed being relieved of duty on his own behalf and as a representative of the Calexico Police Officers Association. He is association vice president.

”As for the POA’s stand on this raid, we’ve got nothing to hide and everyone involved will prevail,” he said when contacted late Thursday. “I believe this is politically motivated and has been going on for a year. I believe this has all been orchestrated by (Councilwoman) Maritza Hurtado and the city manager.”

Casillas underscored that no one in the department, nor he personally, has been involved in any criminal misconduct, and he said he believes the FBI’s visit was purposefully conducted right before Tuesday’s election because of the recent active political campaigning by the CPOA against Hurtado.

“This whole circus” negatively affects the community by taking four officers off their job when the Police Department is already short-staffed, Casillas said.

Meanwhile, Bostic noted during the press conference that some investigations start at the local level before progressing to the state and federal levels, often taking several years to conclude.

“I did not want that for the citizens of Calexico. I have heard your voice. I have heard your pain and so this is our attempt, and Richard Warne’s attempt to bring everybody together now and the mayor and the City Council, to get to the bottom of it as swiftly and legally as we can and that’s why it’s happening this way as a joint investigation,” he said. “We all have different responsibilities in the investigative process.”

Around 9:45 a.m., a wave of FBI agents emerged from a number of vehicles, with some carrying in cases to presumably collect evidence. The agents were followed by a local locksmith service into the police station during the initial activity.

The Calexico Police Department has been the subject of a nearly year-long internal investigation initiated by former City Manager Oscar Rodriquez, and the city’s private investigator has been working closely with the FBI, District Attorney’s Office and Imperial County Sheriff’s Office.

The District Attorney’s Office has also been investigating alleged Brown Act violations by members of the City Council, but it’s unclear how that investigation may be related, if at all, to the Police Department investigation.

Bostic described Thursday as a “sad day and it’s a happy day” and repeatedly noted that the department has “an unbelievably good core group of police officers.” Emotional at one point, he pledged to bring to light any findings as soon as it’s appropriate.

Warne agreed, noting that the joint investigation involves a “small number of people” and that “the vast majority of our officers are dedicated men and women who come to work every day and do an outstanding job for us.”

The city manager brought in Bostic just two weeks ago after firing former Police Chief Pompeyo Tabarez. Tabarez’s brief tenure was marked by a sharp divide for his support within City Council and the community as well as a brief suspension in the spring.

Bostic is a 34-year veteran of the Los Angeles Police Department with experience in the Rodney King and Rampart investigations as well as a reputation for “transforming organizations,” Warne has said.

In just two weeks, Bostic has made several notable changes including relegating city bus inspections and narcotics investigations to other agencies, and publicly expressed concern about the department’s $1 million-plus in overtime last year. Police officers, not including the police chief, accounted for seven of the 10 highest-paid Calexico city employees due to overtime in 2013, according to city documents.

More so, with many in the community now coming forward to complain about old misconduct cases, Bostic is bringing in outside private investigators to help do investigations more quickly “so we can get on top of everything that’s happened over the last year or so because I don’t want there to be this long drawn-out mystery because internal investigations sometimes take years,” he said.

Bostic’s former partner with the LAPD, now a retired commander working as a consultant, is also coming down to do a complete audit of the department.

”Everything we do in policing will be audited over the next few months and I will come back to the community with that audit as soon as I can get it,” Bostic said.

He noted that “today when the FBI came, I ran into six (officers), and ‘thank you’ was their response.”

Moreno, Loera and Otero were unaware of the raid until Thursday morning, and Moreno said that’s a style he’s comfortable with. Members of the council have been criticized by the Joint Powers Insurance Authority over the last year for inserting themselves inappropriately into city processes.

The JPIA, an organization that provides members with coverage such as liability protection, a workers’ compensation program, property insurance program and more, has told the city it is considering terminating its coverage in 2015. Many of the Calexico JPIA issues involve the Police Department, and those were noted in the JPIA Performance Improvement Plan for the city a year ago.

Otero emphatically promised transparency in any future potential findings and said that “hopefully in the near future, we can rid the city of the bad apples.”

It’s unclear if that investigation has direct ties to the joint investigation involving the FBI, although at least one of the officers relieved of duty — Sgt. German Duran — was investigating the shooting before Bostic reassigned it to outside agencies.

The District Attorney’s Office will be evaluating cases being handled by the officers who were relieved “on a case-by-case basis looking at whether or not we can go forward,” Assistant District Attorney Deborah Owen said. Defense attorneys involved in those cases will be notified.

Some of the FBI agents came in from the San Diego field office to assist with the investigation, and all evidence collected will be reviewed and analyzed to determine the next step of the investigation, FBI Agent Darrell Foxworth said. At the appropriate time, the U.S. Attorney’s Office and local District Attorney’s Office will then look at the evidence to determine whether it supports state or federal prosecution.

Anyone with information to be shared with the FBI regarding the investigation can call 760 355-0397.

I covered the border and Calexico for two-and-a-half years but am now the courts and crime reporter. I studied journalism at the University of Texas at Austin and previously worked as a staff photographer in Austin, Dallas, Costa Rica and rural Oklahoma.

This Week in Pictures: September 11-17

This Week in Pictures: September 4-10