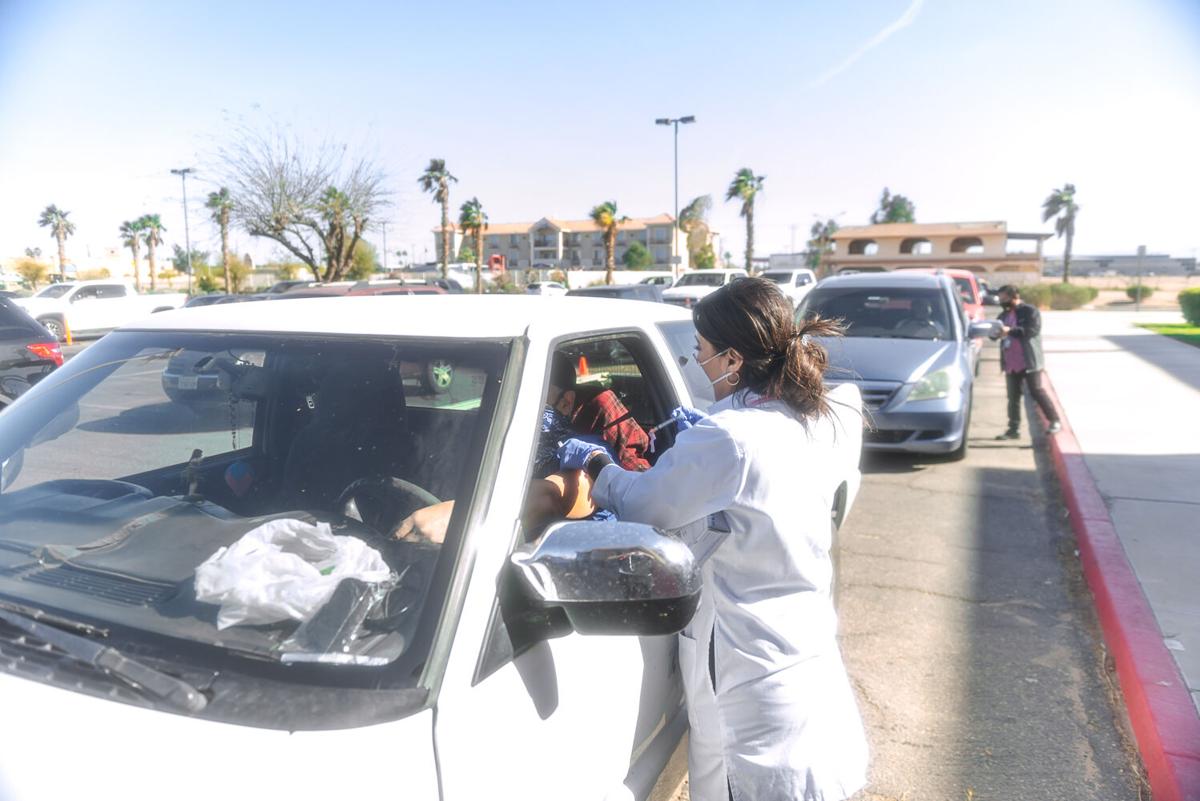 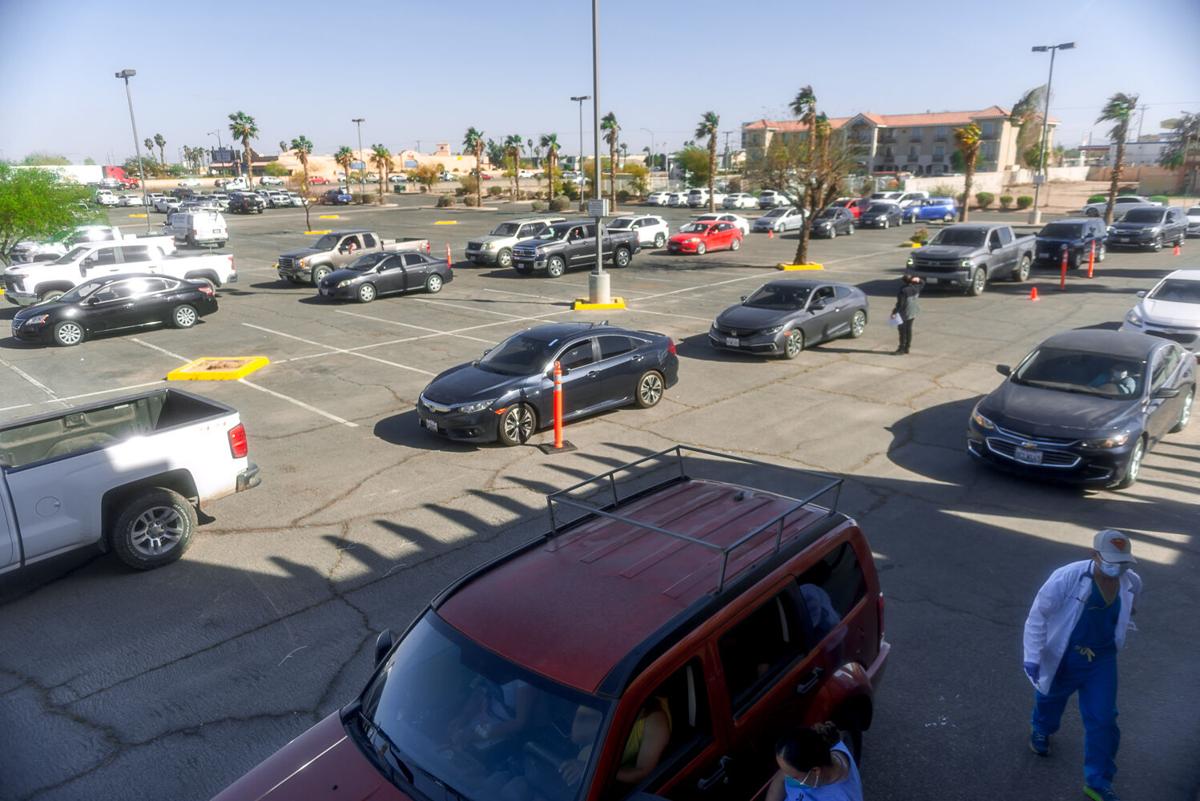 Vehicles wait in the four vaccination lines during a mass COVID-19 vaccination clinic on March 25 in Calexico. PHOTO VINCENT OSUNA

Imperial County, tucked into the southeast corner of California, learned early on what it meant to be a COVID-19 hotspot. The virus bulldozed through the agricultural county last spring, then again in the winter. About one in six residents has been infected, and 745 people have died.

But Imperial County has one statistic that is giving local health officials hope: 86 percent of its eligible population has been vaccinated with at least one dose. It’s one of the best vaccination rates in California, eclipsed only by Marin and Santa Clara counties and tied with San Francisco. Statewide the rate is 74 percent.

In addition, Imperial was one of only 11 counties in mid-July where more than half of its residents on Medi-Cal, the state health insurance program for low-income people, were vaccinated. That’s a sign that it is faring better than most counties in protecting its disadvantaged residents from COVID-19.

In many ways, Imperial is defying the odds: Despite its remoteness and high poverty, which is often associated with worse health outcomes, most of its 186,000 residents appear steadfast in keeping the virus at bay.

“In general, there is a correlation with income and vaccination rates, but I think what Imperial County data tells us is that it can be overcome, it just takes effort,” said Fabian Rivera-Chavez, assistant professor of pediatrics and biological sciences at the University of California, San Diego.

The reasons for Imperial’s high percentage of vaccinated residents are not well understood. But local experts and health officials say one key factor is its strong network of non-profits, clinics, hospitals and agricultural employers that have reached out to people personally to provide vaccinations.

Located far from California’s more populous areas, Imperial’s residents over the years have come to rely on their local network to overcome health challenges.

“In our world, we do learn from others. I think small communities, we are used to working closely together and that has translated in our efforts and our response,” said Rosyo Ramirez, a deputy director at Imperial County’s Public Health Department.

The county has administered 227,700 doses of COVID-19 vaccines. “There is no way we would have been able to do that on our own,” Ramirez said.

Imperial has the largest proportion of vaccinated residents in the entire southern half of the state. About 73 percent of Los Angeles County residents and 50 percent of Kern County residents, for instance, have received at least one shot, compared to Imperial’s 86 percent.

Imperial County has a lot working against it when it comes to controlling a pandemic.

More than one in five residents live in poverty, one of the highest rates in the state. About 85 percent of its population is Latino, a group that statewide continues to fall behind on vaccines; 46 percent of Latinos in California have yet to receive a first dose, according to state data.

That means not having access to a car in Imperial can pose significant challenges and limitations for people seeking vaccinations.

Being a border county, Imperial also has a large bi-national population, meaning people may work on one side of the border and live on the other. That comes with its own unique logistical challenges in controlling and tracing the spread of the virus.

The Imperial Valley was an uninhabited desert wasteland, bordered by barren mountains, until it was transformed at the turn of the 20th century when a canal diverted Colorado River water to irrigate crops. Since then, it has become a top producer of vegetables and livestock, valued at more than $2 billion a year, led by cattle, alfalfa, lettuce and broccoli. Its biggest city is El Centro, home to 44,000 people.

A personalized approach to vaccinations

Reaching out to people in remote towns that are many miles apart is difficult, but seems to be paying off in Imperial County.

Rosa Diaz, CEO of the Imperial Valley LGBT Resource Center, said her organization has focused on some of the most rural communities, like Ocotillo, Bombay Beach, Niland and Seeley, where populations range from 200 to 1,000 people. When the weather allows, her team sets up canopies in these towns to provide vaccine education and information on how to sign up, and to survey people on whether they have bedridden family members that need transportation, Diaz said.

For four months this year, a medical team from El Centro Regional Medical Center, one of two area hospitals, set up shop at the Imperial Valley Mall every Friday. They’d administer anywhere from 600 to 1,000 doses a day – on their busiest day they had almost 2,000 people, said CEO Adolphe Edward.

Many farm workers have to report to different worksites, so going through the contractors was a good way to capture more people, Trimm said.

“You had these buses full of workers from the fields show up to vaccination clinics,” Trimm said. “The goal was really to make it as easy as possible.”

Trimm said that local providers also set up clinics at the border to offer doses to farm workers and others who come into Imperial for work.

The county offers vaccinations to people who work in Imperial and live on the Mexico side. But its vaccination data only reflects doses given to people with U.S. addresses and ZIP codes, county public health officials said.

“If they’re working here, they’re affecting our community,” Ramirez said. “From the beginning we understood that it was important to get them vaccinated.”

While there is no county data to show vaccination uptake by sector, Trimm said that anecdotally there wasn’t much vaccine resistance or hesitance among farm workers.

“At this point you’ve had COVID or have a loved one who did,” Trimm said. “So many people saw family members dying or sick. It can’t get any worse than that. So if there was a way to save themselves, people did it.”

The medical center’s Edward agrees that many of the county’s residents may have felt compelled to get vaccinated because the virus hit close to home. “People got serious about it,” he said.

Imperial County may have more natural immunity because of its high infection rate.

“A county that was hit hard like Imperial is also likely to have a higher rate of natural immunity,” Rivera-Chavez at UCSD said. And when people who have natural immunity get vaccinated, they gain what’s known as “hybrid immunity,” which can provide even stronger protection, he explained.

Still, as long as some residents continue to be unvaccinated, there is risk, Edward said. In the last two weeks, Imperial’s COVID hospitalizations jumped from eight to 16 on average between July 29 and Aug. 11. Hospital admissions in California have shot up at roughly the same rate.

This shows that there is still work to be done. More than half of Imperial County residents are on Medi-Cal. And while Imperial is ahead of most other counties with 50 percent of its Medi-Cal members vaccinated, that means there is another half that has fallen into the gap.

Earlier this month, the state announced it would be rolling out $350 million in incentive payments for health insurance plans to increase vaccination among their Medi-Cal members across the state. Funding for health plans is contingent on them meeting specific vaccination goals, and some money could provide direct incentives to people, like grocery store gift cards.

“I’m glad people are getting vaccinated, but we can’t stop here,” Edward said. “I think a lot of people are running out of energy … but we know that the people left are the hardest to reach.”

CalMatters.org is a non-partisan, non-profit journalism venture committed to explaining how California’s state Capitol works and why it matters.