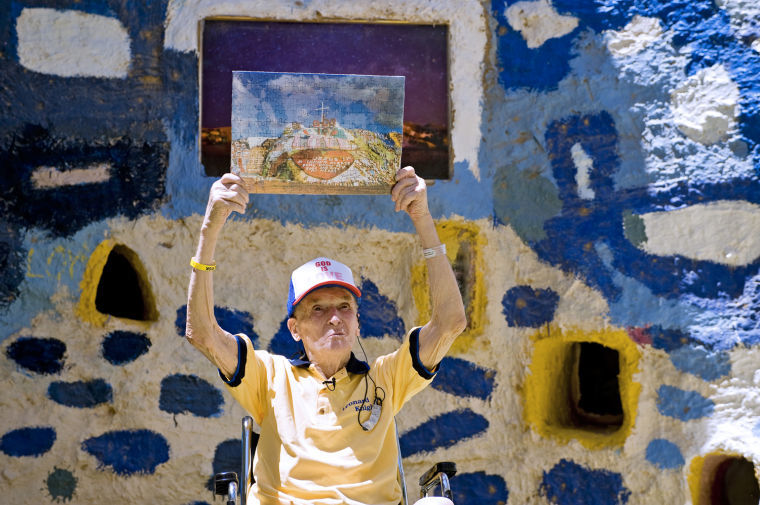 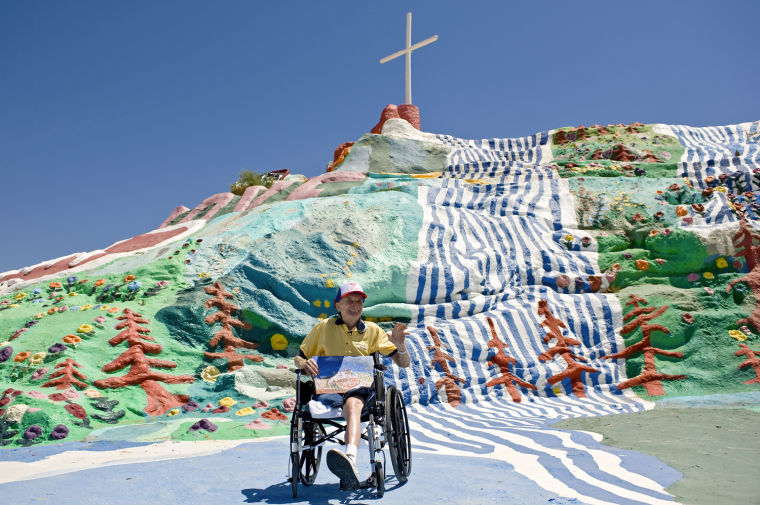 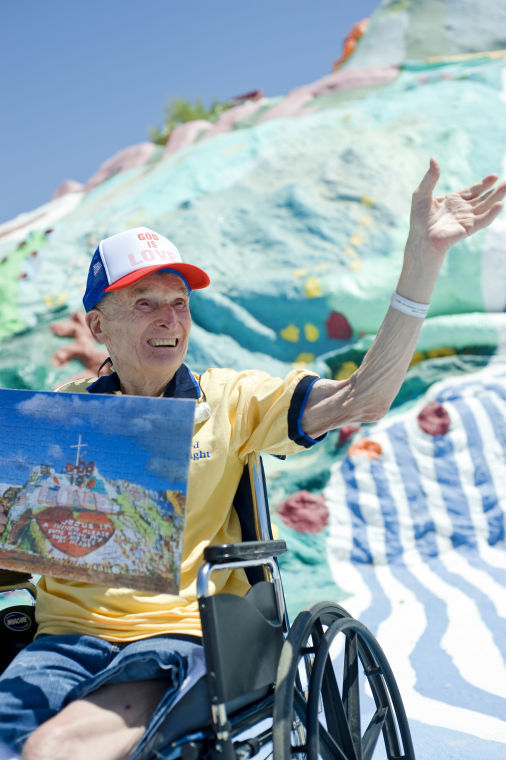 Knight died in his sleep around 1:40 p.m. in Eldorado Care Center in El Cajon, where he had been living for more than two years.

Dan Westfall of San Diego and president of Salvation Mountain Inc. said Knight kept getting weaker and weaker following the loss of his leg, his hearing and his sight. Knight stopped eating two weeks ago, Westfall said.

“He realized he was never going to see his mountain again and decided it was time to go,” Westfall said.

Knight last visited his creation in November, where he celebrated his 82nd birthday.

His message to all who came to see his creation was simple: love one another.

Salvation Mountain is Knight’s tribute to God’s message of love, a message he built into the side of a mountain just outside Slab City. He methodically molded the structure out of adobe over the course of some 27 years while he lived in the back of a Chevy truck at the base of the site.

Snowbirds, squatters and visitors on their way to Slab City are greeted with an extravaganza of colors and biblical verses that spill down the side of the mountain. “God is love” is painted in its center. A simple white cross is affixed to its top.

Although the area has been the subject of numerous documentaries, it was Sean Penn’s 2007 film “Into the Wild” that catapulted Salvation Mountain into the nation’s consciousness and inspired Ohio residents Lucinda and Kerry Ward to visit the area.

They outfitted their van for extended periods on the road, headed west, and arrived at Salvation Mountain in September 2013. They’re still there and now work full-time as caretakers of Knight’s creation.

“We fell in love with this place,” Lucinda explained.

They spoke with Knight on Nov. 3, when he visited the mountain.

“He was full of stories that day,” Lucinda said. “He smiled all day long. It was a really wonderful day. He said he wanted fruit trees planted for little kids.”

Alberta, Canada, residents Brenda and Wally Garrioch happened to be at Salvation Mountain on Monday with their friends, Calgary residents Linda and Duane Maser.

It was the Masers first visit to the area.

It was Brenda’s third visit. She met Knight about six years ago, when he was still living at the base of the mountain.

“He wanted to show us the mountain. He talked to us quite a bit,” she recalled.

Brenda attributed their visit to Knight’s mountain mere hours after he died to karma.

Services have not been set yet, but Westfall said part of Knight’s ashes will be spread at Salvation Mountain, and part will be interred at Fort Rosecrans National Cemetery in Point Loma. Knight was a Korean War veteran.

This Week in Pictures: September 11-17

This Week in Pictures: September 4-10