SAN DIEGO — A federal grand jury returned an indictment charging four nationals and residents of the People’s Republic of China with a campaign to hack into the computer systems of dozens of victim companies, universities and government entities in the United States and abroad between 2011 and 2018, U.S. Attorney’s Office for the Southern District of California announced at a press conference Monday.

The indictment, which was returned May 28 and unsealed by court order on Monday, alleges that much of the conspiracy’s theft was focused on information that was of significant economic benefit to China’s companies and commercial sectors, including information that would allow the circumvention of lengthy and resource-intensive research and development processes. 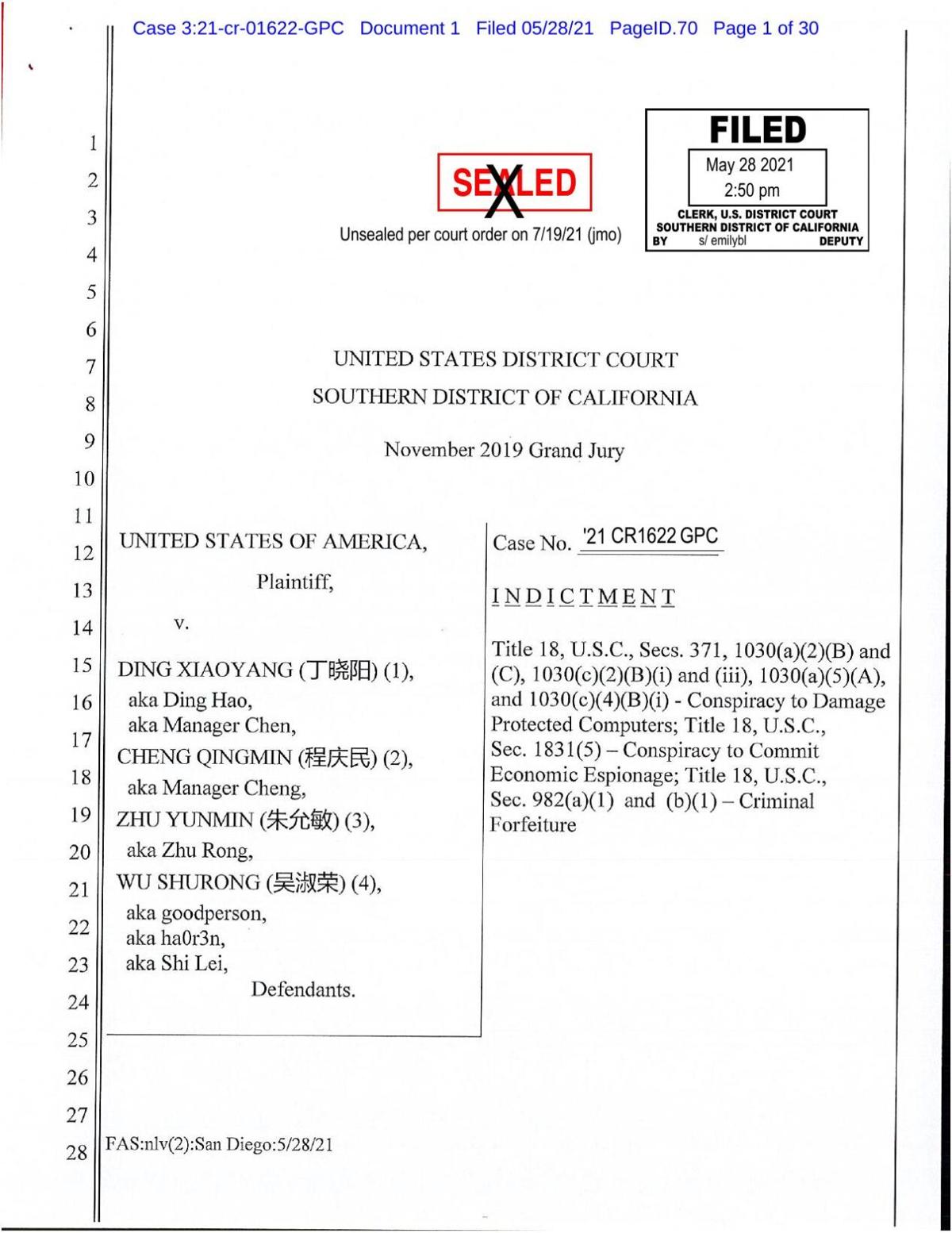 The defendants and conspirators at the Hainan State Security Department (HSSD) sought to obfuscate the Chinese government’s role in such theft by establishing a front company, Hainan Xiandun Technology Development Co., Ltd., since disbanded, to operate out of Haikou City, Hainan Province.

The two-count indictment alleges that Ding Xiaoyang, 35; Cheng Qingmin, age unknown, and Zhu Yunmin, 37, were HSSD officers responsible for coordinating, facilitating and managing computer hackers and linguists at Hainan Xiandun and other Ministry of State Security (MSS) front companies to conduct hacking for the benefit of China and its state-owned and sponsored instrumentalities. The indictment alleges that Wu Shurong, 39, was a computer hacker who, as part of his job duties at Hainan Xiandun, created malware, hacked into computer systems operated by foreign governments, companies and universities, and supervised other Hainan Xiandun hackers.

As alleged, the charged MSS officers coordinated with staff and professors at various universities in Hainan and elsewhere in China to further the conspiracy’s goals. Not only did such universities assist the MSS in identifying and recruiting hackers and linguists to penetrate and steal from the computer networks of targeted entities, including peers at many foreign universities, but personnel at one identified Hainan-based university also helped support and manage Hainan Xiandun as a front company, including through payroll, benefits, and a mailing address.

“These criminal charges once again highlight China continues to use cyber-enabled attacks to steal what other countries make, in flagrant disregard of its bilateral and multilateral commitments,” said Deputy Attorney General Lisa O. Monaco. “The breadth and duration of China’s hacking campaigns, including these efforts targeting a dozen countries across sectors ranging from healthcare and biomedical research to aviation and defense, remind us that no country or industry is safe. Today’s international condemnation shows that they world wants fair rules, where countries invest in innovation, not theft.”

“This indictment alleges a worldwide hacking and economic espionage campaign led by the government of China,” said Acting U.S. Attorney Randy Grossman. “The defendants include foreign intelligence officials who orchestrated the alleged offenses, and the indictment demonstrates how China’s government made a deliberate choice to cheat and steal instead of innovate. These offenses threaten our economy and national security, and this prosecution reflects the Department of Justice’s commitment and ability to hold individuals and nations accountable for stealing the ideas and intellectual achievements of our nation’s best and brightest people.”

“The FBI alongside our federal and international partners, remains committed to imposing risk and consequences on these malicious cyber actors here in the U.S. and abroad,” said Deputy FBI Director Paul M. Abbate. “We will not allow the Chinese government to continue to use these tactics to obtain unfair economic advantage for its companies and commercial sectors through criminal intrusion and theft. With these types of actions, the Chinese government continues to undercut its own claims of being a trusted and effective partner in the international community.”

“The FBI’s San Diego field office is committed to protecting the people of the United States and the community of San Diego, to include our universities, healthcare systems, research institutes and defense contractors,” said Special Agent in Charge Suzanne Turner of the FBI’s San Diego Field Office. “The charges outlined today demonstrate China’s continued, persistent computer intrusion efforts, which will not be tolerated here or abroad. We stand steadfast with our law enforcement partners in the United States and around the world and will continue to hold accountable those who commit economic espionage and theft of intellectual property.”

According to the indictment, to gain initial access to victim networks, the conspiracy sent fraudulent spearphishing emails, that were buttressed by fictitious online profiles and contained links to doppleganger domain names, which were created to mimic or resemble the domains of legitimate companies. In some instances, the conspiracy used hijacked credentials, and the access they provided, to launch spearphishing campaigns against other users within the same victim entity or at other targeted entities. The conspiracy also used multiple and evolving sets of sophisticated malware, including both-publicly available and customized malware to obtain, expand, and maintain unauthorized access to victim computers and networks. The conspiracy’s malware included those identified by security researchers as BADFLICK aka GreenCrash; PHOTO, aka Derusbi, MURKYTOP aka mt.exe; and HOMEFRY aka dp.dll. Such malware allowed for initial and continued intrusions into victim systems, lateral movement within a system, and theft of credentials, including administrator passwords.

The conspiracy often used anonymizer services, such as The Onion Router (TOR), to access malware on victim networks and manage their hacking infrastructure, including servers, domains, and email accounts. The conspiracy further attempted to obscure its hacking activities through other third-party services. For example, the conspiracy used GitHub to both store malware and stolen data, which was concealed using steganography. The conspiracy also used Dropbox Application Programming Interface (API) keys in commands to upload stolen data directly to conspiracy-controlled Dropbox accounts to make it appear to network defenders that such data exfiltration was an employee’s legitimate use of the Dropbox service.

The U.S. Attorney’s Office said the investigation was conducted jointly by the U.S. Attorney’s Office for the Southern District of California, the National Security Division’s Counterintelligence and Export Controls Section, and the FBI’s San Diego Field Office. The FBI’s Cyber Division, Cyber Assistant Legal Attachés and Legal Attachés in countries around the world provided essential support. Numerous victims cooperated and provided valuable assistance in the investigation.

Assistant U.S. Attorneys Fred Sheppard and Sabrina Feve of the Southern District of California and Trial Attorney Matthew McKenzie of the National Security Division’s Counterintelligence and Export Control Section are prosecuting the case.