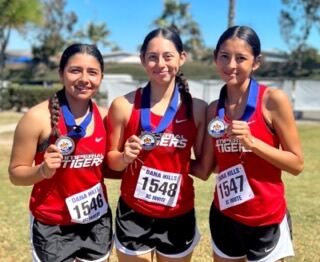 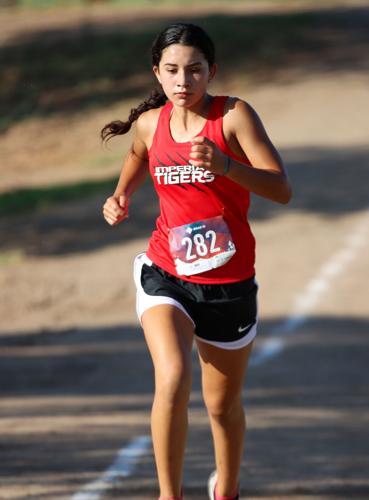 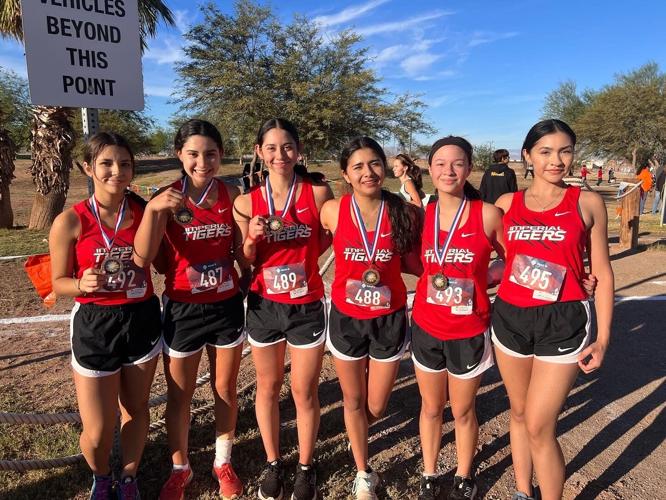 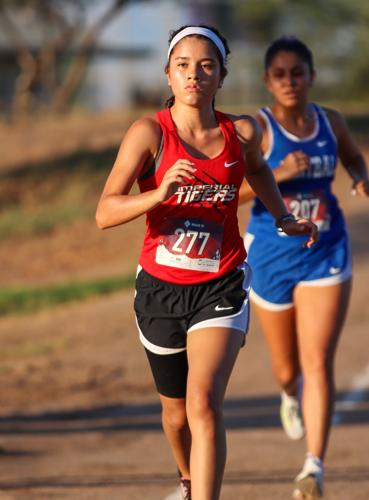 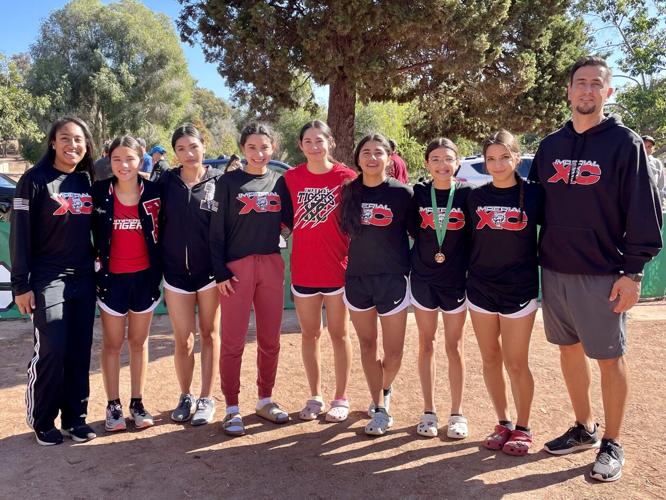 “The goal was to finish in the top three; the girls knew the third place was up-for-grabs,” said Imperial Coach Athena Nuno. “It’s something we knew all season and we knew we had to get at least three in the 20’s (minutes) and two more in the 21’s, and that’s what we did.”

Competing in D-IV based on student population, the three-time reigning Imperial Valley League Champion Tigers feel that the IVL’s switch from a dual meet to a cluster meet format helped prepare Imperial for CIF competition.

“I ran in dual meets with another team but now we do cluster meets and all the teams compete at Sunbeam Lake,” said Nuno who ran cross country and track at Southwest High School. “I like the cluster meets because it gives the vibe of the bigger meets and everyone gets pushed with no one team is dominating the meet ... it’s not just one team wins, your team has an effect on every other team’s score.”

The Tigers’ Girls’ Cross Country team is, to say the least, as an interesting a mix of athletes as can be found with three runners who simultaneously play volleyball, softball, and soccer, while competing in the physically-demanding marathon-like sport.

Nuno, a positive-outlook millennial, embraces the uniqueness of her team.

“We would not have made it without sharing runners with other teams,” Nuno said. “And they see a value to running cross country and they feel comfortable in our program, and make extra efforts to run because they want to do well for our program.”

Exhibit A for a program in the 2020’s is freshman Jimena Valdovinos, who led the Tigers finishing ninth overall at the CIF-SDS meet with a time of 20:04.4 over the 2.96 mile course.

“Jimena was my student in fifth grade and she ran a 6:08 mile,” Nuno said. “I told her to come see me when she got to high school. Instead, I found her because she wasn’t sure she could commit to running because she practices soccer in San Diego twice a week and would miss practice.”

While other coaches might have shied away from a two-sport-in-one-season athlete, Nuno thought outside the box.

“We worked that out by having her do our workouts on her own, and we are glad she did,” Nuno said.

Nuno is also glad that the team’s other freshman, Mirella Barron – who finished fourth for the Tigers and 23rd overall with a time of 21:09.5 – conversely thought doing two sports at one time was something she could do.

“We share Mirella with softball as she plays travel ball,” Nuno said. “She was excited and wanted to run but prioritized cross country for the season. She started strong but a high ankle sprain caused her to miss some time and she’s still recovering. She’s still helping the team but it’s not at a level of what she can do.”

And then there are the Cardona sisters, senior Xiomara and sophomore Nayeli, who bring their own brand of uniqueness to the team, having competed for the CIF-State Girls Basketball Division IV Championship in Sacramento in March.

This week, Xiomara Cardona (20:48.5) finished third for the Tigers and nineteenth overall at CIF, while Nayeli Cardona (22:05.9) finished fifth for Imperial and 34th overall. Both are also playing for the Tigers’ varsity basketball team.

Friday night Nov. 25, the Cardonas and the Imperial hoops team will play a semifinal game at the Fohi (Fontana High) Fest Tournament at 7:40 p.m.

“They are at a basketball tournament and we support them,” Nuno said, whose Tigers are the first race of the day at 8:30 a.m. “Their family is going to drive to Fresno and they will run and go back to the tournament.”

The Cardona family has a third sister on the Imperial squad, freshman Citlali Cardona, who spent most of the season as the Tigers’ seventh runner but will miss running in the CIF-State meet.

“Citlali’s a freshman and she moved into the starting seven,” Nuno said, “but she has been sick and has injuries and missed running in the CIF finals.”

Of the seven runners who will line up at the CIF State Meet, three – senior Angelique Graham and juniors Angelica Barbosa and Arely Ortega – fit the traditional high school runner profile of competing in cross country in the fall and track in the spring.

Come this spring, the trio will join the Tigers’ Track Team where Nuno is the Girls’ head coach and works with her and Boys’ Coach Wolfgang Horner’s distance runners.

The story of this unique, first-ever mega-hybrid Imperial Cross Country team to make a CIF-State meet would not be complete without mentioning that the assistant coach is Athena’s spouse, Victor Nuno.

“I was initially hired as the assistant coach and then the head coach stepped down and I took the head job, and I chose Victor,” Athena Nuno said in her fifth season as the Tigers’ coach. “Victor became a runner as an adult and he is a student of running and all that is involved with the sport.”

The last team to represent the CIF-SDS’s Southeastern Conference at the CIF-State Cross Country Championship Meet was the 2018 Holtville High Vikings’ Boys, who finished 13th out of twenty-five teams.

There is no charge for parking at Woodward Park, however tickets are available online only through CIF’s ticketing partner, GoFan.

The D-IV CIF-State Meet live splits and results can be viewed at rtspt.com/events/cif/xc2022 and the event can be viewed live or on demand on pay-per-view at nfhsnetwork.com.