Get out your bike and ride for exercise! I tell this to anyone who will listen. Often they reply with two objections. No. 1: It’s not safe. No. 2: That seat hurts my butt.

I have to admit that I have gotten hurt riding my bike. So it does have its hazards. But I didn’t need to get hurt. I’ve done some bike racing, both in Mexico and the U.S., and during races I’ve crashed, let’s see, four times.

Two times, I crashed all alone because of bad decisions during the intensity of the race. Twice I crashed on top of racers who had crashed in front of me. Those two crashes were unavoidable and could happen to anyone. If you race, you will likely crash. But I wasn’t hurt, just scraped and bruised.

I’ve also crashed on ordinary bike rides, but that was due to not properly maintaining my bike. Everything wears out, and bike chains and gears are not exempt. If I had gotten my bike checked, I wouldn’t have crashed.

In over 40,000 miles of pedaling a bike I have never been hit by a car. I’ve ridden alone and with a group, on the freeway and roads without shoulders, and I have not been hit by a car. Yes, cycling is more dangerous than walking, but it’s more fun, too.

And there are also ways to avoid danger. Follow the rules for cars. Ride with traffic, not against it. You have a right to the road, so use the road and not the sidewalk.

California just passed a law that mandates cars to maintain three feet of space from bikes. Still, stay as far to the right as possible. In town (and everywhere), ride in a straight line. Don’t weave in and out of parked cars. Use a mirror attached to your helmet (always wear a helmet) so you can see when cars come up behind you. There is safety in numbers, so ride with others if possible.

And how about those hard seats and skinny tires? Yes, even professional cyclists, who might spend up to six hours a day on their bikes, can get a sore butt. Good cycling shorts can make a big difference, as can a properly fitted saddle.

Racing cyclists are worried about keeping their bikes as light as possible, so they use very hard, light saddles, but you don’t have to. Get a padded one. Most bike shops recognize that it’s hard to find a comfortable saddle, so they give you 30 days to try it out.

And like anything else, you need to get used to it. I ride my bike up to three hours at a time with no problem with soreness on my behind. Start riding your bike 15 minutes to a half hour and work up to longer times as your body adjusts.

The saddle fit, however, is just one component of getting comfortable on a bike. Many people get out the bike in their garage and when they’re not comfortable on it, give up. It’s super important that your bike fit you, not only for your size — leg and trunk length — but also riding style. A racer rides in a very low, bent over position because it’s more efficient aerodynamically. Most people prefer a more upright riding position. So take your bike down to your local bike shop so they can check it is the right size for you and adjusted to fit you properly.

Brian McNeece, our cycling blogger, has taught English at Imperial Valley College for the past 28 years.  When his knees and back started bothering him about 12 years ago, he abandoned running as a fitness practice and took up cycling instead.  Since then he’s averaged about 4,000 miles a year, including some racing.  As a 55 year-old he pedaled at 22.3 mph for the 109 miles Tour de Tucson.  Along with the Imperial Valley Velo Club, Brian has organized seven nationally-sanctioned series of bike races.  The IV Velo Club will be hosting the 2nd Annual 3:10 to Yuma Charity Bike Ride on February 28, 2015.  Time to get ready for a 30 or 60 mile ride to Yuma, Ariz.! 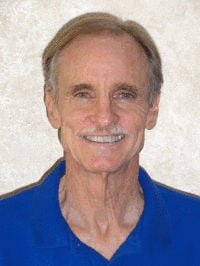 Brian McNeece, our cycling blogger, took up cycling 12 years ago. Since then he’s averaged about 4,000 miles a year, including racing. As a 55 year-old, he pedaled the Tour de Tucson and has organized 7 nationally-sanctioned series of bike races.