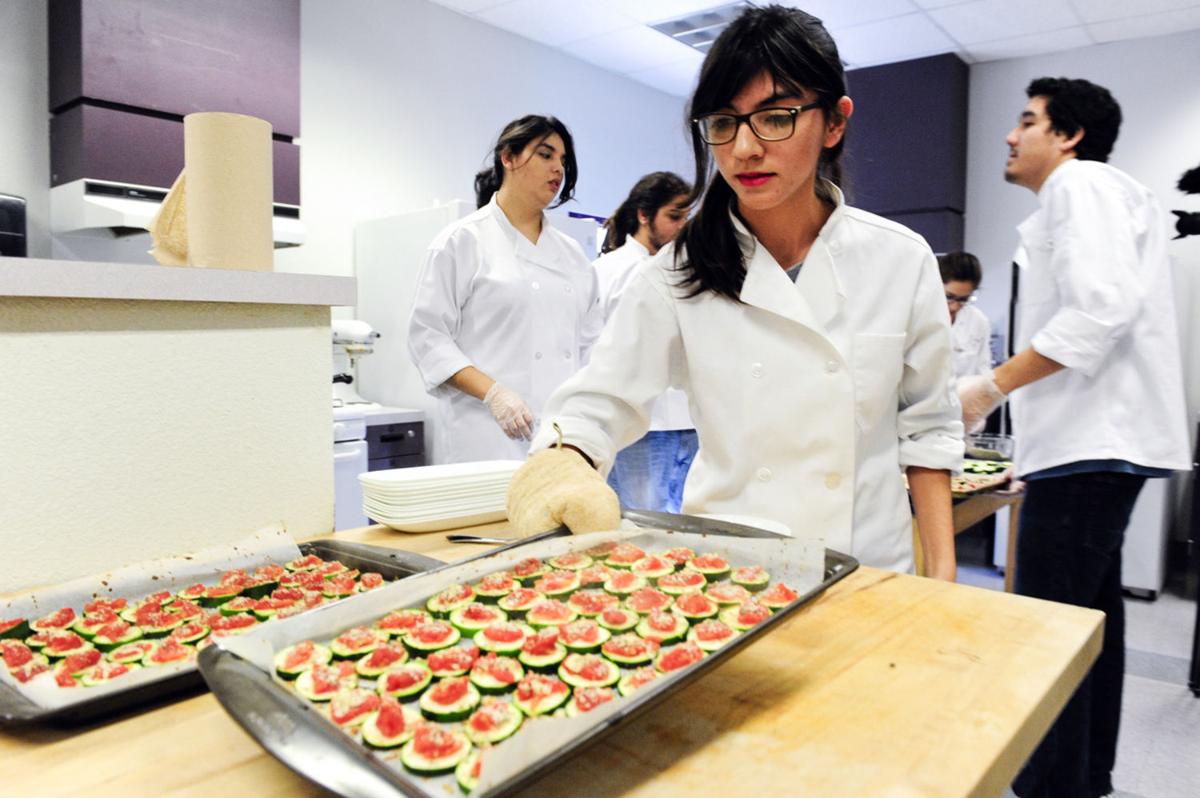 Itzel Ayala sets baked zucchini with tomato and cheese down to cool during the culinary art class for Kafé 56 at Southwest High School. 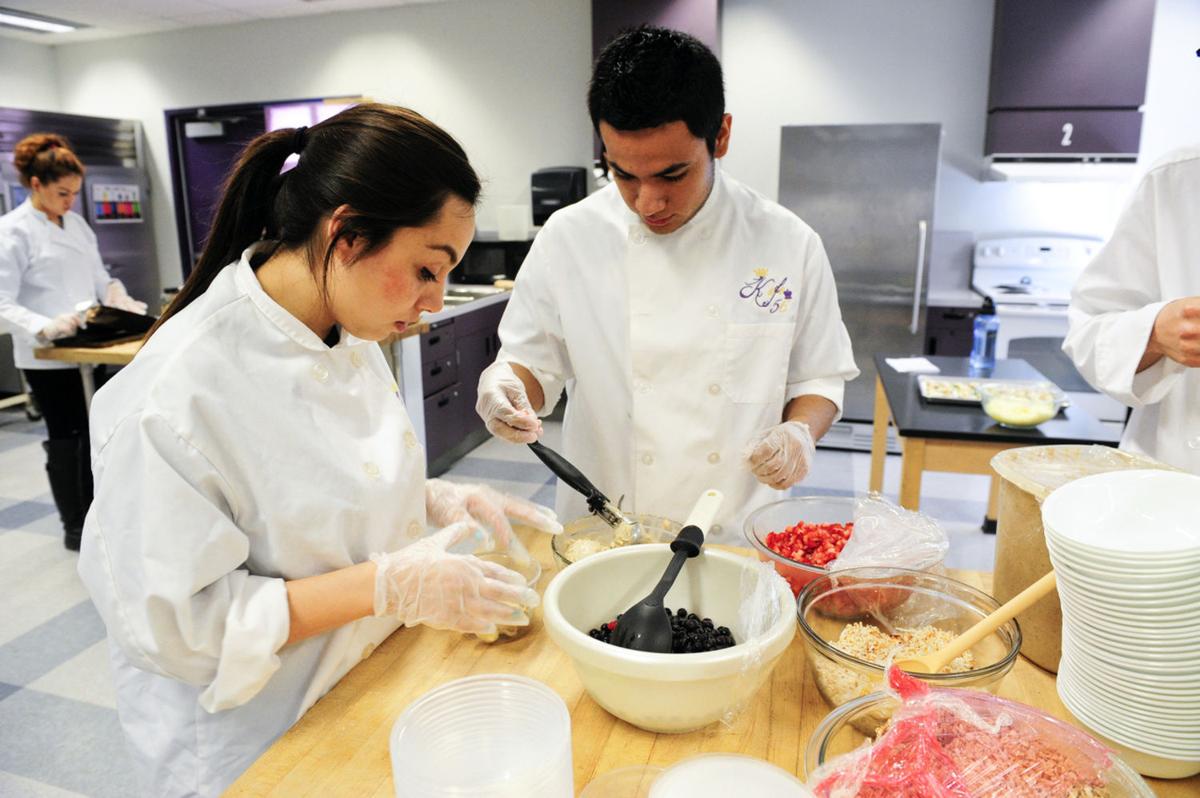 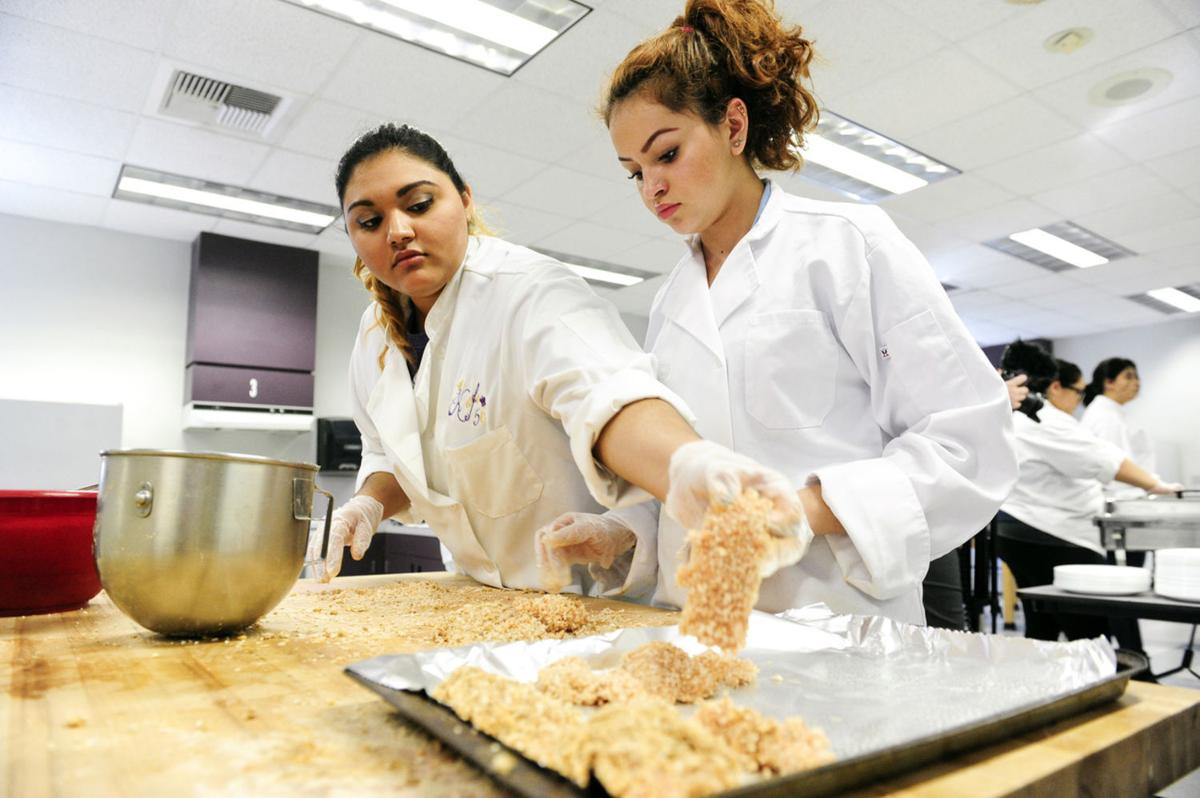 Betsy Alvarez (left) places a battered chicken piece onto a pan as Celia De Alba batters them during the culinary art class for Kafé 56. 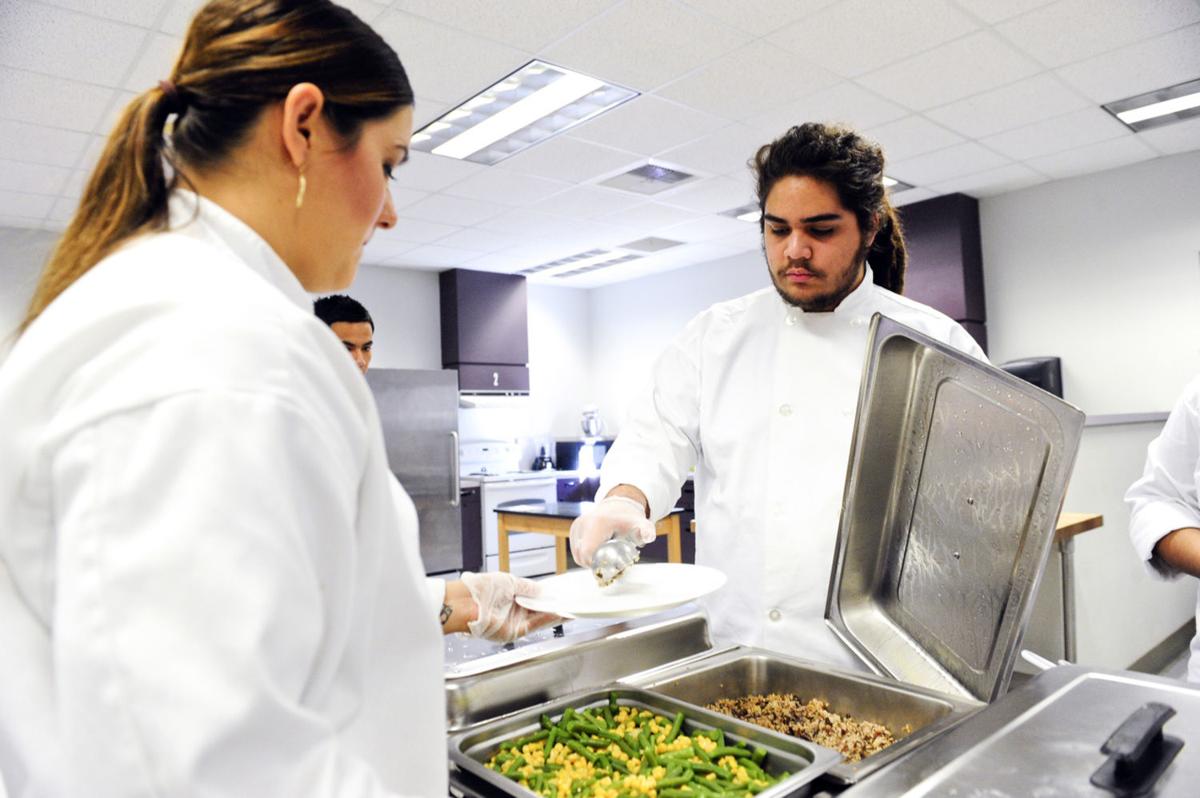 Renne Perez places a scoop of rice onto Amanda Hill’s plate during the culinary art class for Kafé 56.

Itzel Ayala sets baked zucchini with tomato and cheese down to cool during the culinary art class for Kafé 56 at Southwest High School.

Betsy Alvarez (left) places a battered chicken piece onto a pan as Celia De Alba batters them during the culinary art class for Kafé 56.

Renne Perez places a scoop of rice onto Amanda Hill’s plate during the culinary art class for Kafé 56.

Like most teenagers, 17-year-old Ittel Ayala said she doesn’t normally eat too many vegetables.

As a culinary arts student at Southwest High School, healthy foods have been on the menu lately and it is looking rather enticing.

“It looks really good,” Ittel said, referring to the food the class made for Kafe 56, a lunch prepared on campus for teachers and staff, on Wednesday. “I would eat this.”

The menu consisted of appetizers, entrées, desserts and drinks.

They made cucumber rolls, garlic edamame and zucchini bites for appetizers. The main entrée was roasted salmon with peach and mango salsa and white rice or oven-fried chicken with cauliflower mash, green beans and corn. Iced green tea, spa water and lemonade were prepared.

Dessert was a banana split. Bananas were served with banana ice cream, coconut and fresh berries.

Culinary arts teacher Amanda Hill was inspired by the Valley Challenge, a challenge by the Imperial Valley Press for the whole county to lose 100,000 pounds collectively in 90 days, so she asked her students to begin living a healthier lifestyle.

When the class returned from the Christmas and New Year’s break, they were challenged to come up with three personal goals related to fitness, nutrition, mental health or even school. The idea is to track the goals and see what is realistic to each student, Hill said.

Daniela Palma said some of her goals are to eat better and drink more water. The goals were set just one week ago, but she said she is off to a good start.

Senior Mike Torres said he realized he can eat healthy and eat the some of the same foods he regularly eats.

Instead of using butter, for example, finding alternative options works just as well.

By making the banana ice cream, Hill said it shows the students flavors like banana can be sweet enough to be a dessert.

Other healthy recipes have included breakfast foods such as egg muffins, Hill said. Many students said they do not eat breakfast, but the egg muffins are quick to make, and the students can prepare one in advance and easily eat it on the way to school.

The students on working on meals plans in the class, too, since smaller portion sizes are another way to eat healthier, she said.

Staff Writer Krista Daly can be reached at 760-337-3445 or kdaly@ivpressonline.com

As the County beat reporter, I cover the Board of Supervisors and the city councils for El Centro and Imperial, as well as health issues and community events. I received a Master's degree in Specialized Journalism from USC Annenberg in 2013.

This Week in Pictures: May 1-7