Skip to main content
You are the owner of this article.
Edit Article Add New Article
You have permission to edit this article.
Edit
Welcome, Guest
HOME
ADVERTISE
RACK LOCATIONS
HEALTH DIRECTORY
CONTACT US
IVPRESSONLINE.COM
1 of 5 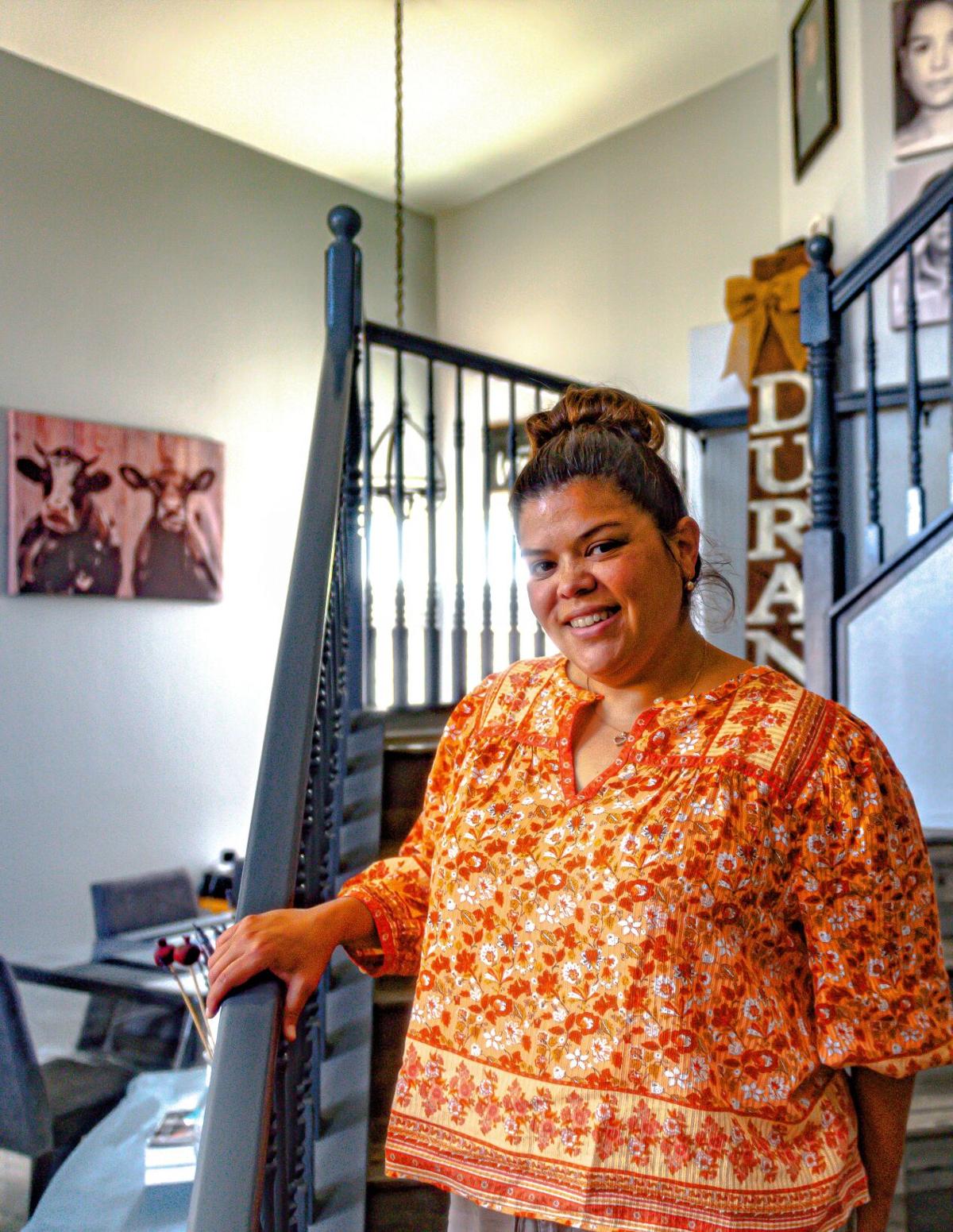 Liliana Duran inside her home in Imperial. PHOTO VINCENT OSUNA 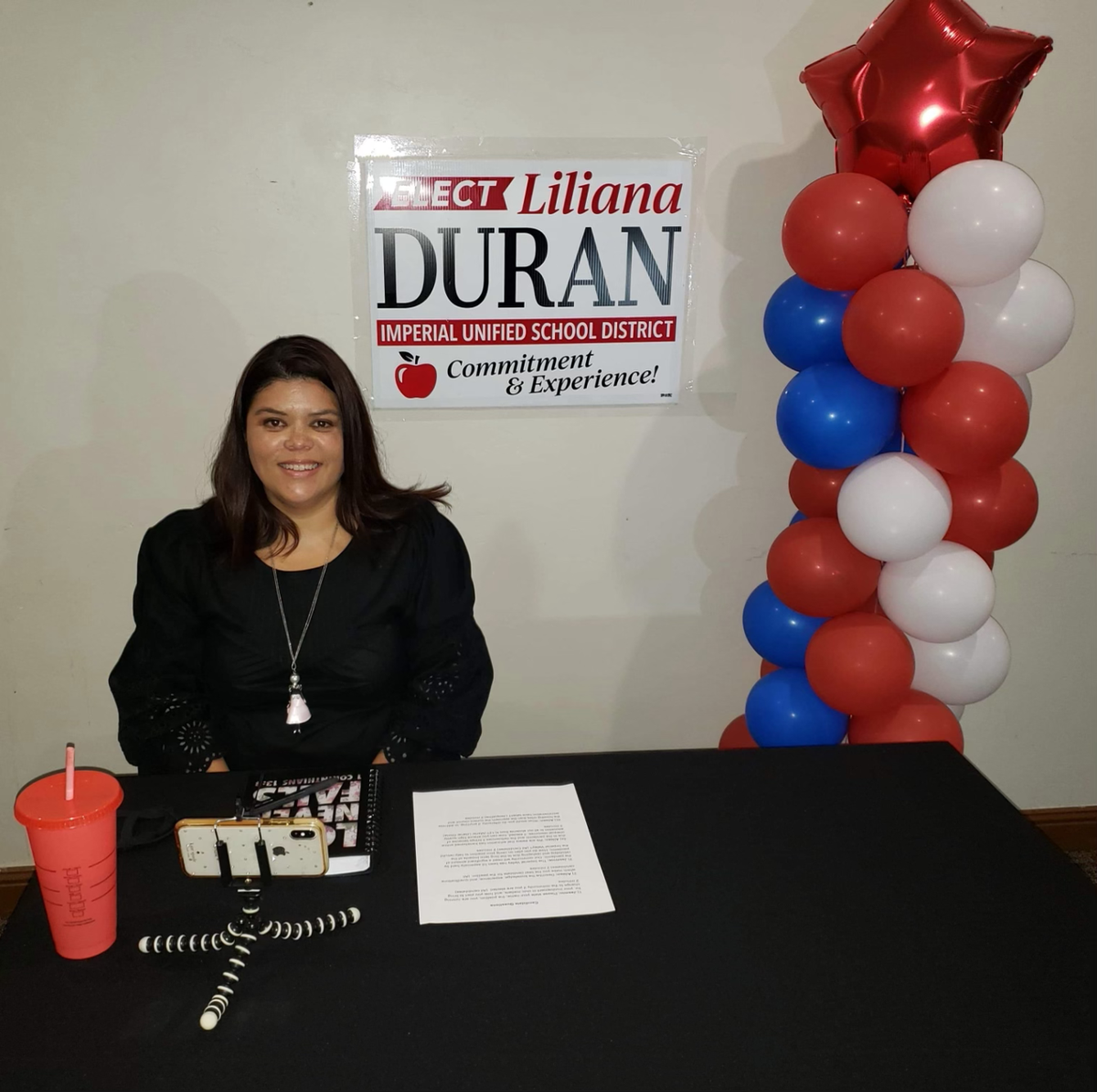 Liliana Duran received the endorsement of the Imperial Teachers Association en route to winning her seat on the Imperial Unified School District Board. COURTESY PHOTO 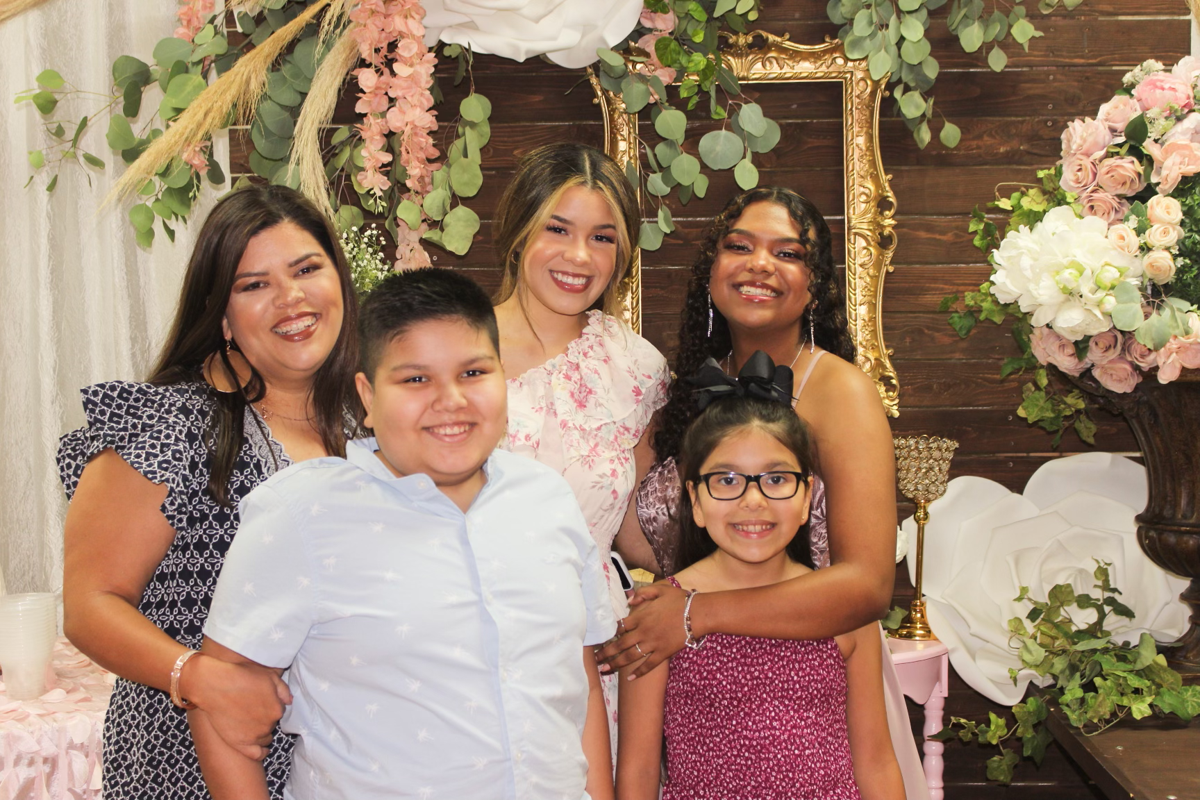 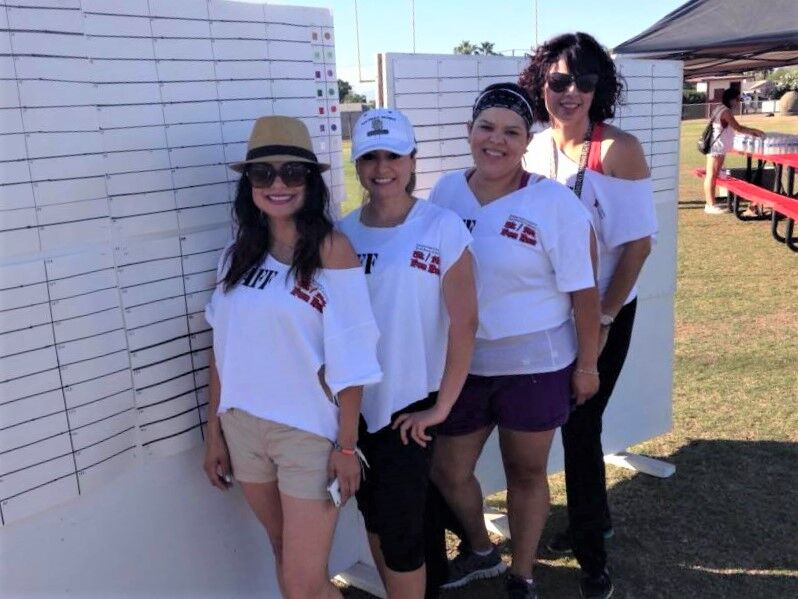 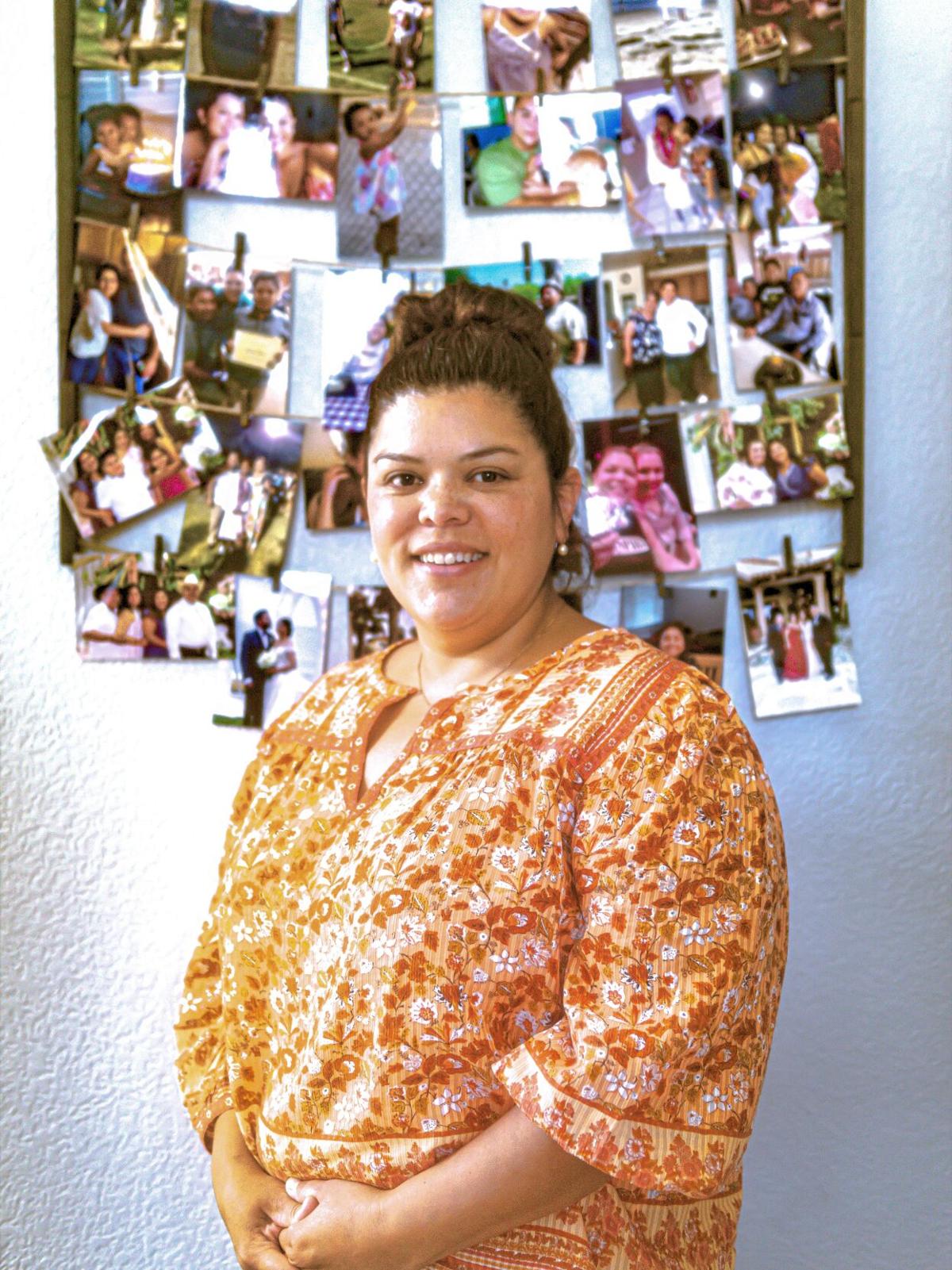 Liliana Duran inside her home in Imperial. PHOTO VINCENT OSUNA

Liliana Duran received the endorsement of the Imperial Teachers Association en route to winning her seat on the Imperial Unified School District Board. COURTESY PHOTO

Before every vote Liliana Duran makes as an Imperial Unified School District trustee, she reflects on her own experience as an educator and as a parent.

A teacher for the past 17 years, Duran knows what she wants when voting on curriculum.

At the same time, she places the overall well-being of IUSD students first, as she has a few of her own.

Duran took her seat on the IUSD board in December 2020 with no prior political experience.

In fact, Duran was dismissive toward ever becoming a board member after her experience with the Calexico Unified School District board.

Her distaste for the board was so strong that, in 2006, she participated in a protest alongside other CUSD teachers outside a district board member’s house.

She taught in the Calexico district for 11 years before accepting a calling to become a teacher for the California Department of Corrections and Rehabilitation (CDCR).

While her children were still below high-school age and in CUSD schools, she and her late husband, German, decided to relocate the family to Imperial so the children could attend IUSD schools.

Being a teacher at Calipatria State Prison (CAL) in Calipatria has granted Duran more free time than she previously enjoyed as a public school teacher. She decided to put some of that time to use on behalf of the community by filing her candidacy for the school board.

“I was finally able to give back,” she said. “Moving them here has made a big impact on who my kids will become.”

Born in El Centro, Duran grew up in Calexico. After graduating high school, she moved to San Diego to attend San Diego State University, where she eventually earned her teaching credential.

“Then I came back to teach in Calexico, where I was originally from,” she said.

Duran began her teaching career at the CUSD in 2004. She taught middle school English, as well as English Language Development students.

Duran’s family has been a part of the city of Calexico decades. Her mother, Lourdes Cordova, who is now more than 70 years old, retired after 34 years as the city’s clerk.

Her late brother, Adrian C. Cordova, was a Calexico police officer. His passing in November 2007 was the first time a CPD officer had died on duty.

From public school to prison

In 2015, Duran decided to make the switch to CDCR.

“I wanted a different challenge,” Duran said of the change.

She began at CAL by teaching inmates who were working toward their General Educational Development (GED). She now teaches English to an inmate group consisting of non-native speakers and persons with very limited reading skills.

“Through drug use or they just never finished school,” Duran said of the latter group. “They can’t read past third grade.”

Prior to this assignment, Duran had never taught English at an elementary grade level, but she has enjoyed her change of campus.

She also observed that, since she and her colleagues aren’t allowed to bring anything into the prison, she now never has to worry about decorating her classroom.

At CAL, she has a teacher’s aide – help she didn’t have at CUSD unless she had immigrant students.

“It’s a lot less stressful,” she said. “I feel a lot more relaxed.”

Because of her prior experience, Duran believes strongly that public school teachers need unions to protect them against unfair wages.

“There’s a lot of times where teachers will give up their time with their children,” she said.

“People don’t really see what teachers do,” she added, such as when a teacher is “out at Target trying to find something for that kid who doesn’t have enough money to buy a notebook.”

In 2011, Duran and her family moved to Imperial.

Fueling this relocation was the desire for the betterment of her children.

Circumstances in the Calexico district were not to her liking.

“There was a lot of things happening at that district that I didn’t want my kids to go through,” she said. “I just wanted a better school system for them. I don’t regret my decision one bit.”

Duran recalled that, while she was teaching at Enrique Camarena Junior High School, she and her colleagues would occasionally have to stay up past midnight to hear a final decision from the CUSD board, as the board members would prolong their discussions.

“I wasn’t very fond of board members at all,” she said. “We fought tooth and nail. In Calexico, you always had to fight for simple things, so I knew what I didn’t want to be,

“I didn’t want to be those board members,” she continued. “They we’re totally dismissive to parents. Everything was so chaotic there. I thought, ‘I could never do this (be a school board member).’”

Learning that IUSD board meetings have a typical duration of 45 minutes softened her stance enough for her to decide to run, but because she wasn’t from Imperial, she doubted her ability to win.

“I’m not anybody popular here,” she said.

To her surprise, she received the endorsement the Imperial Teacher’s Association and collected 4,919 votes, which was enough for a first place finish over rivals Victor Lopez and David Ross.

“The board here does listen to their community – honestly, they do,” Duran said.

Duran has already shown she isn’t afraid to swim against the current with her votes.

“That’s just how it’s going to be for a while,” she said of being on the skinny side of 4-1 votes. “I think my mindset is a little different. Sometimes, I just don’t agree with certain things. I’m doing what I feel is right for my community and the students.”

For example, in March, the board approved a proposed back-to-school schedule, which required students to show up for only two hours a day until reopening restrictions were lifted.

She was the only member who voted against this schedule. Before voting, she considered what her own experience would be like in having to drop off her kids then pick them up two hours later.

“I really didn’t feel it was fair to working parents,” she said.

On the flip side, Duran also takes what’s best for the district into consideration.

For instance, during its meeting Aug. 12, the board was bombarded with questions from parents concerned with the board’s decision to require that all students wear a face mask while in the classroom.

“I was very happy to see parents standing up,” she said. “At that meeting, they were upset.”

Had she been just a parent, Duran said she felt she would have been allied with other parents in the audience.

“You kind of have to weigh both sides – what’s best for the district?” she said. “At this point, it’s a mandate. You need those protocols in place so the district doesn’t get sued.”

As for her own agenda, Duran has two things she would like to see through before her term on the board expires in 2024.

She said would like to see more technology brought into classrooms, such as Apple MacBooks.

Also, she would like to see the IUSD not only hire, but also retain, highly qualified teachers, which is something Duran didn’t see during her time in Calexico.

“Calexico was the type to fire teachers and hire them the next year,” she said. “Calexico has awesome teachers that have left that district.”

While her future as a school board member remains contingent upon the will of voters, Duran said she plans to remain a teacher as long as she is able.

“It doesn’t matter where you put me to teach,” she said.

Duran can be reached at lduran@imperialusd.org f