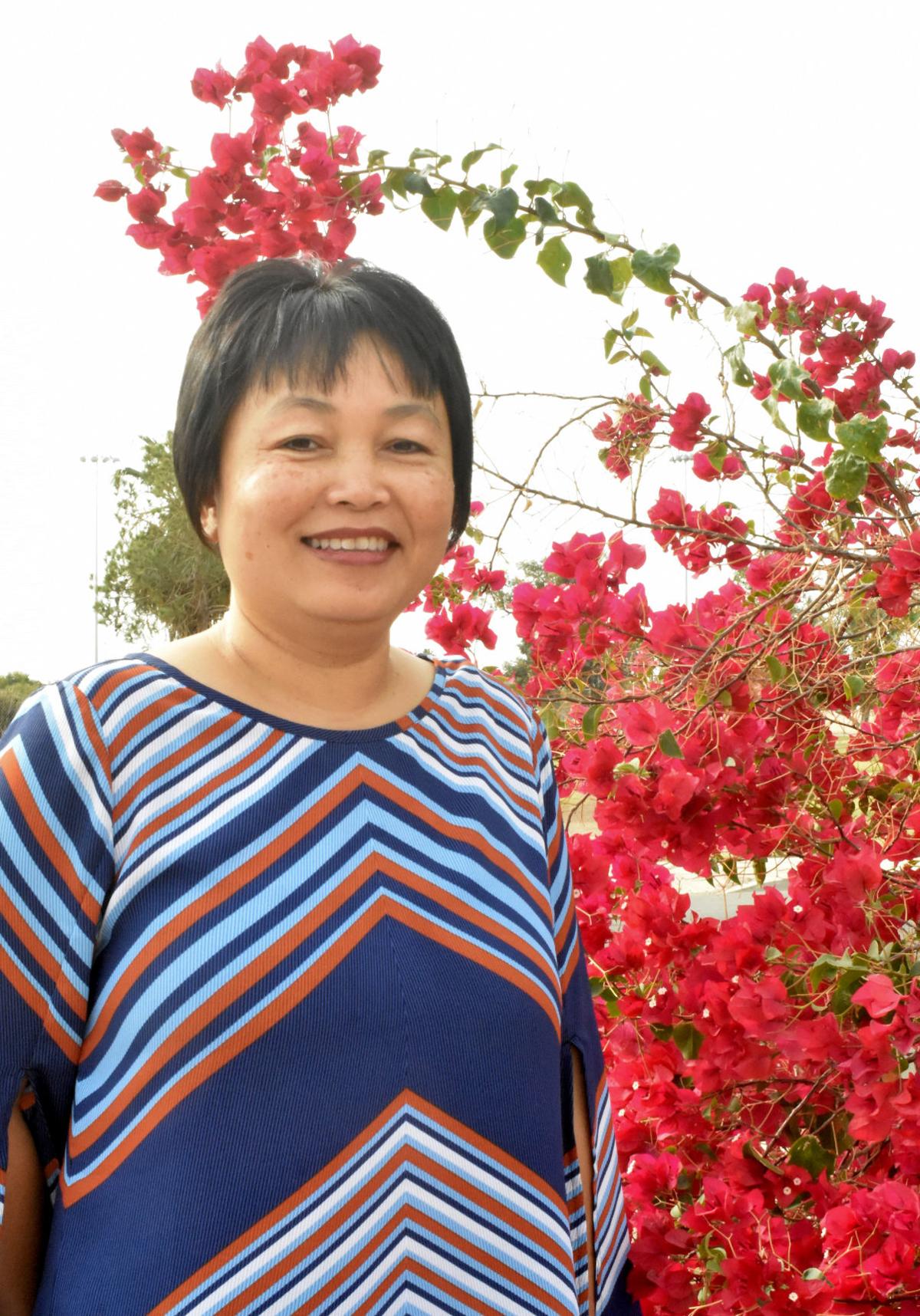 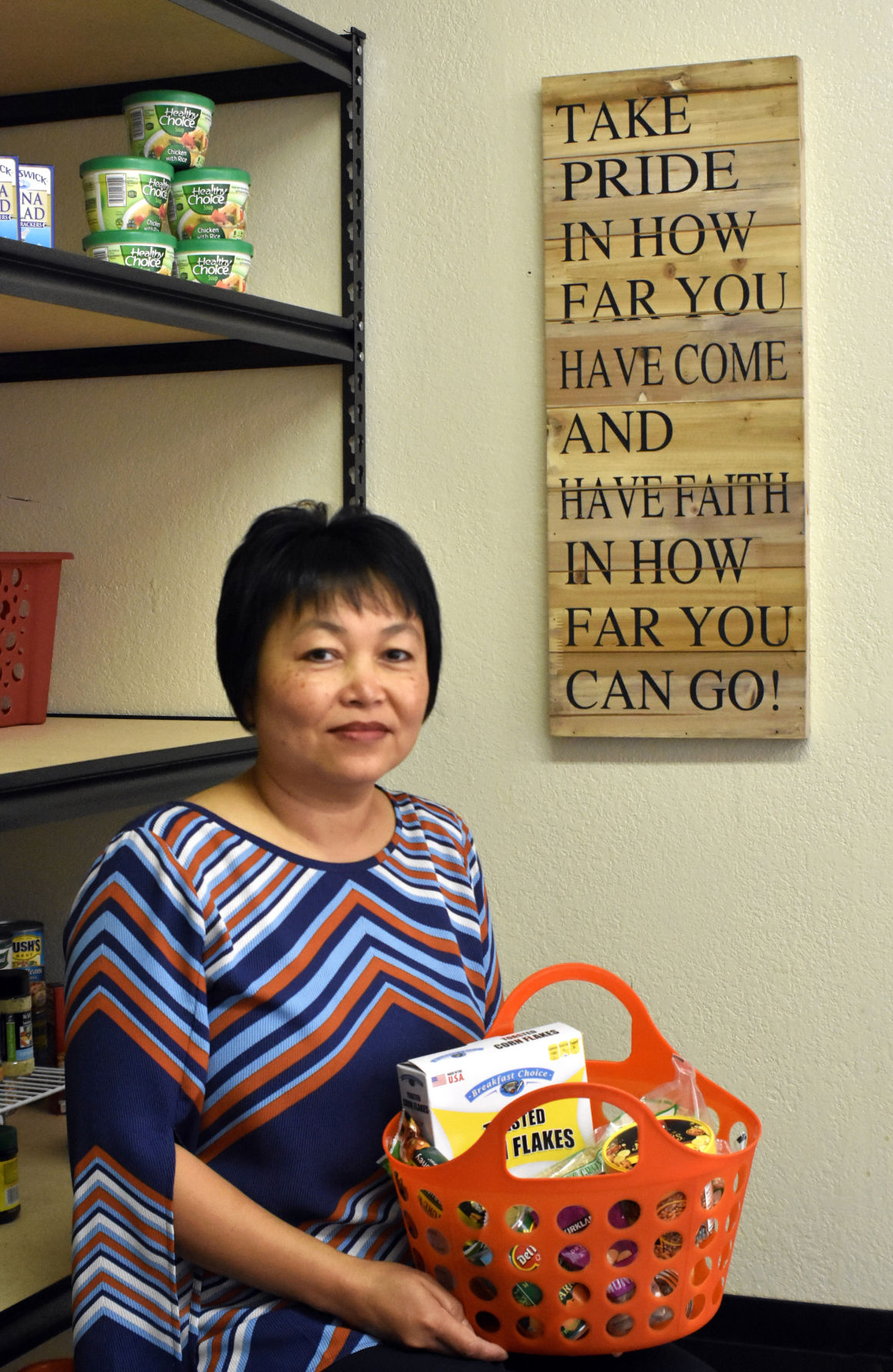 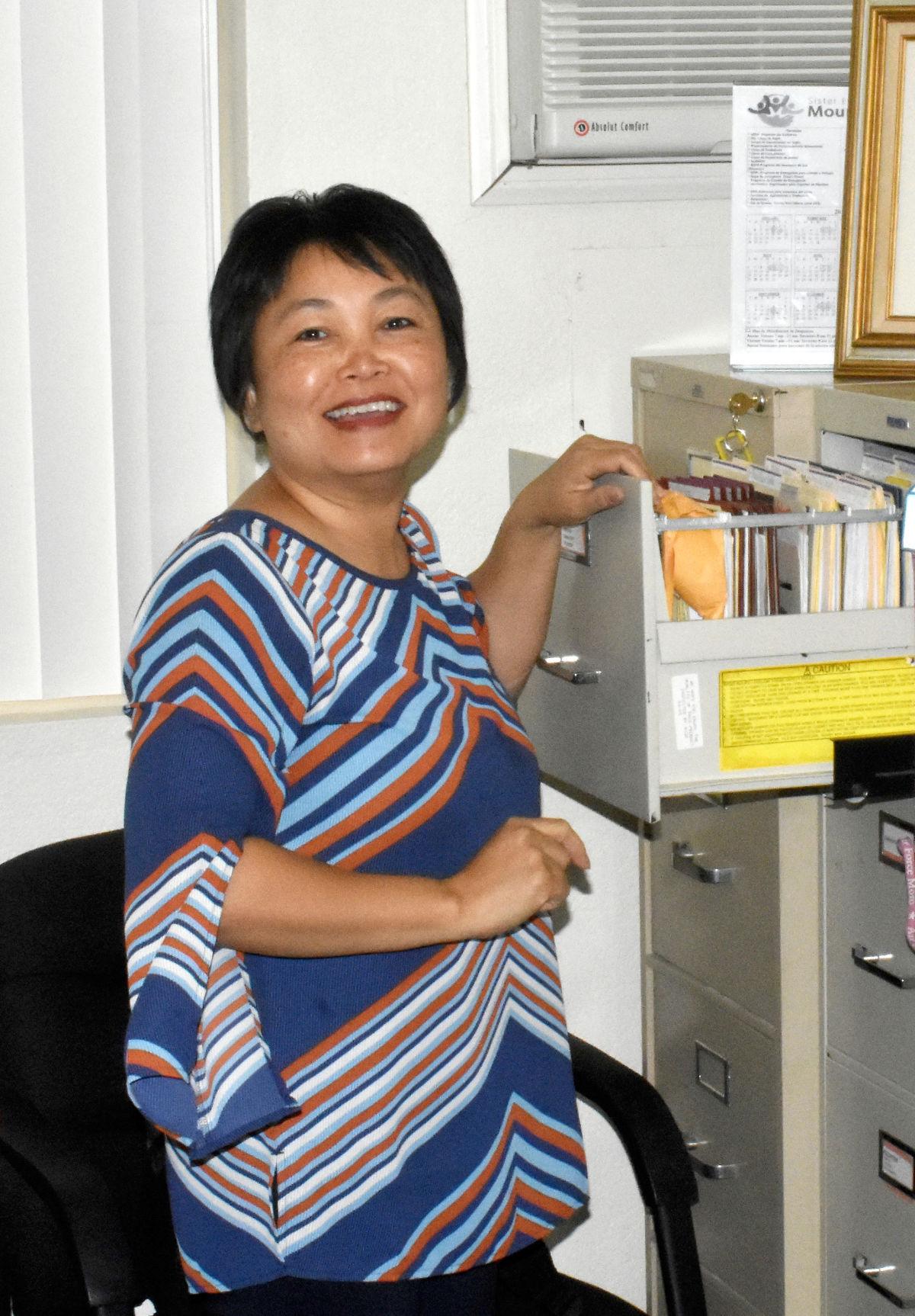 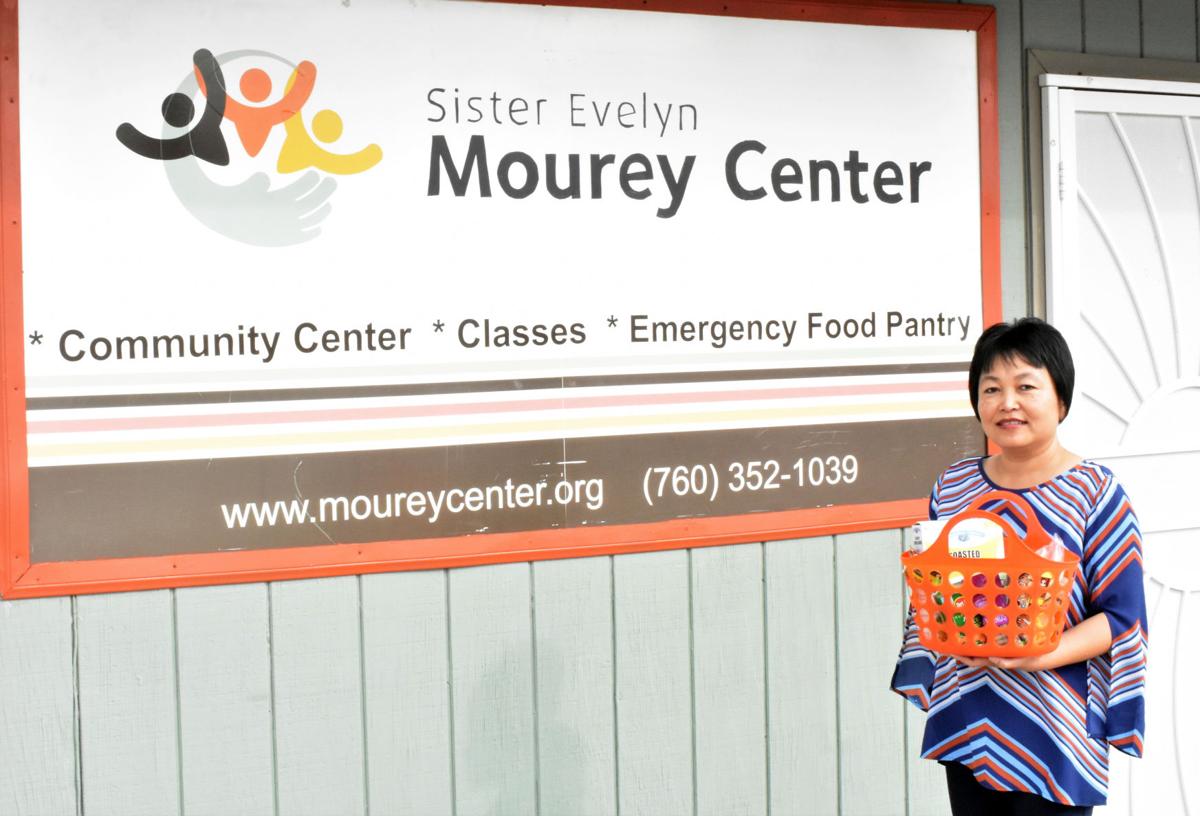 Susan Chasang’s life has been an often complicated journey that has taken her on a circuitous path to where she is today. Many jobs, lots of education — some formal, most through life experiences — raising three children as a single mom, and so on.

But don’t tell her that.

She thinks her life is simple, and has been lived simply, one foot in front of the other, one step at a time. She lives her life, she said, according to Maslow’s Hierarchy of Needs, which says as long as one’s basic needs are met, like food, water, shelter and security, everything else is a gradual step toward realizing one’s potential and living a fulfilling life.

“I really see myself as a pretty simple person. It’s pretty much we get up every day; we make choices, and we follow through on our choices, and along the way, there are meaningful moments, and through our choices we make daily... we become a fulfilled human being,” Chasang said.

It’s that philosophy that even guides her professional life today as executive director of the Sister Evelyn Mourey Center in El Centro, a nonprofit agency tasked with helping men and women with their basic life needs (food, rent, utility and clothing assistance, among other things) on their way to striving toward self-actualization (learning, becoming self-sufficient, reaching their potential).

“What we try to do here and what I try to do is take a holistic and comprehensive approach to things,” the 49-year-old El Centro resident said. “We don’t want to enable people and just give a handout.

“It’s about coming through this door and looking at all the options they’ve never looked at before. That’s the big thing; it’s about accessibility,” Chasang added.

How she got here

Chasang was born in Thailand. Her mother, who was Thai, was romanced by her eventual stepfather, a U.S. Air Force airman, who brought the family to the Imperial Valley when Chasang was 6 years old. Her father was born and raised in the Valley.

She said she was a typical kid, with a love-hate relationship with the area. “I liked the small-town environment and feel, but then you hate that there wasn’t enough entertainment.”

In a lot of ways, Chasang said, she was a reflection of the clients she serves today at the Mourey Center: She went to Central Union High School, dropped out, obtained her GED, and married and had a child young.

She said she was wed with her first child by the time she was 18 years old. She was also attending Imperial Valley College at the time.

Eventually, Chasang said, she took “a 12-year sabbatical” from her formal education, got divorced, worked a few different jobs to raise what would be three children — daughters Alexis, now 31; Brittany, now 28, and son Clayton, now 26.

Over about a 17-year period she worked in the banking industry, some 16 years off and on with Valley Independent Bank, which later became Rabobank. She spent a brief amount of time as an internal accountant for a golf resort, thinking she might want to do that, but then decided she didn’t like it much.

In 2005, Chasang became self-employed, as an event planner and coordinator for other businesses under Susan P. Chasang Consulting, something she said she still does on the side when she has time (which isn’t much these days).

She began her circuitous path into the nonprofit world at this point, going to work for the Small Business Development Center in 2012 and again in 2016, where she thought she might end up in a management position, but it didn’t work out.

Life, she says, brought her to the Mourey Center in September 2018.

All along the way education was a central theme in her life. Not just formal, but informal as well. Chasang considers herself a well-informed person, who even through that so-called sabbatical was attending various workshops, at learning annexes, and other places where she could expand her mind. “I always continued my learning; it was self-taught.”

After returning to IVC through this process, she finished her associate’s after six and a half years and quickly went on to San Diego State University-Imperial Valley in Calexico, where she graduated in 2010 with a Bachelor of Arts in public administration with a minor in linguistics.

Once she graduated from SDSU-IV, she didn’t waste any time. Chasang enrolled at Cal State Northridge. In fall 2015, she earned a master’s degree in public administration with an emphasis in nonprofit management.

“A lot of people are surprised by that... because when I tell them [my story] they assume I had my college degree and my bachelor’s all along,” she said, “I’m a well informed and educated person.”

It was all an intense period for Chasang, working full-time, going to school, trying to find a balance in life where she could provide for her family and make sure her children got their educations and that she was there for them — simply “being a responsible adult in life.”

“At the time, yes, it was hard. Just like everybody, there were struggles. It’s busy. I’m not going to say it was easy... it’s normal. Life is tough, and you’re just busy,” Chasang said.

It wasn’t until recently that she began to see that maybe her path in life wasn’t particularly normal, that it was not easy to balance everything and that it was a feat unto itself.

But, Chasang said, “I’m a very organized person. I’m very structured. I’m a very goal-driven person. I’m the type of person who has to have a plan.

“I’ve been told I’m like a dog with a bone sometimes. I just chip away till by my objective is met,” she added.

Taken right from its website, the mission of the Sister Evelyn Mourey Center “is to enhance the welfare of those who live in poverty in the Imperial Valley community, making every effort to improve their living condition by providing food, clothing, social services and skills in order to prepare them to obtain better jobs.”

And that is exactly what Chasang is helping the organization to do.

When she was hired a few months ago, she said, “the board said they wanted me to take the center to the next level in fulfilling the mission.”

On the social services front, the Mourey Center operates a food pantry and it’s an emergency food distribution site for the U.S. Department of Agriculture commodities program through its partners, the United Way of Imperial County, the Federal Emergency Management Administration and the Imperial Valley Food Bank.

She said the organization also provides rental and utility assistance through the United Way.

“We calculate that we assist 300 to 400 households on average monthly,” she said. “That translates into over 10,000 individuals we impact annually.”

On the enrichment and education front, Chasang said the center provides opportunities for the clients to grow socially and personally, and become better-educated through classes and partnerships in the community.

For instance, she has cohorts of women who go through cake-decorating classes to obtain skills, but who will then go through micro-entrepreneurship training and basic financial literacy classes, so that making cakes can become small businesses. There are computer literacy classes and English as a Second Language courses. The center does these through partnerships with IVC and Central Union High School’s adult education program.

“We are a hidden gem people are finding out about. We do a lot of work,” she said.

Chasang does that work with little staff (there is one other person in her office) and with little money.

“I pretty much do everything. I give the analogy that it’s almost like running a start-up business,” she said.

As a sole proprietor, one winds up serving as accountant, operations person, maintenance person and whatever else is needed, she explained.

“When you have tough day, you remind yourself you’re making a difference and impacting people’s lives in a positive way,” Chasang added.

“I believe in the mission and the program and services. I knew this was the place for me,” she said. “I feel it’s very purposeful and meaningful. There’s a purpose for coming every day.”

The personal and beyond

At present, there is no life outside of work for Chasang, but she jokes she wouldn’t have it any other way.

She said she’s not an 8-to-5 type of worker, and “I’m at a point in my life where I get to be more selective how I spend my time professionally,” Chasang said. “I want it to parallel my personal life; I like to do a lot of volunteer work.”

Volunteer work was just another part of that busy life and balancing act that Chasang had down so well for so many years. American Cancer Society’s Relay for Life, the Imperial County Film Commission’s early film festivals; she’s done and tried a little bit of everything.

Unfortunately, she doesn’t have a lot of time for that these days. Fortunately, she works in a position where it feels like volunteer work, and brings that same kind of satisfaction and joy.

Single, Chasang believes wholeheartedly in love and marriage. She would like to have a partner and companion, but, she said, “I think it would take a very special man to sign up and be my partner. Not everyone is cut out for that.”

Atop the pyramid that spells out Maslow’s Hierarchy of Needs is the concept of self-actualization; that is, the idea that you’re becoming your best self, that after your base and survival needs are met, after you feel love and belonging, that you can transcend into something bigger, onto a higher plane of consciousness.

Chasang isn’t there yet, she said, but she’s got a pretty good start. Life in retirement won’t actually be what she says in a typical retirement; rather, she “will work till the day she dies” and work on self-actualization along the way.

“After getting the center where it needs to go, I envision traveling the country and world, and community building in areas that are underserved,” she said.

“I just basically want to travel and see how other folks live,” Chasang said, “see how they create for their communities. I’m just not the type that will take a cruise. I’m going to be working for my retirement days or close to it. Chilling out and taking a cruise, that’s not me. I see myself working and until the day I die.

“There are just so many things out there in the world.”

Staff Writer Richard Montenegro Brown can be reached at 760-337-3452 or rbrown@ivpressonline.com